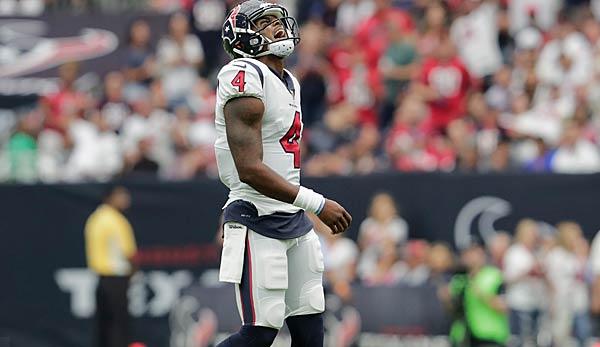 It’s just a game, but the Cincinnati Bengals and the Houston Texans are already in a hangover mood.The focus is on desolate offensive lines and the ongoing quarterback problem with the Texans.Both teams need a sense of achievement quickly – who will win the direct duel at the start of Week 2 (Friday, 2:25 a. m. live on DAZN)?

Fans of the Houston Texans must have felt like a bad movie on Sunday, when head coach Bill O’ Brien – for the second time since 2015 – showed his absurdly short patience with his own quarterbacks in the first match of the season: After Ryan Mallett replaced Brian Hoyer in the opener two years ago, this time Tom Savage was the victim.

A bad first half of his own offense was enough, and O’ Brien pulled the rip cord, the rip cord called Deshaun Watson.The rookie had clearly shown in the preseason that he still needs time, but O’ Brien decided to switch.With the result you could expect.

Watson was able to conduct a touchdown drive and get some yards out of it with his rushing skills.However, he was also under pressure at ten of his 29 dropbacks.Against Pressure he brought one of four passports for twelve yards to the other player, threw an interception and collected four sacks, whereby he fumbled. 4.43 yards per pass attempt Watson and his tuning with the receivers revealed – as in the pre-season – still a lot of air.

It was a game in which O’ Brien should never have thrown the rookie in halftime.The Texans-Line allowed a total of ten sacks and 23 total pressures against Jacksonville, plus two more pressures, which were added to the running backs.Houston’s O-Line is understaffed by the bank, especially since Left Tackle Duane Brown is still on strike.

And yet O’ Brien’s decision to change the quarterback in the first game after months of preparation for the season, however, leaves only one conclusion to be drawn: Watson will probably also play against the Bengals.Not necessarily because Watson’s performance was significantly better than Savages (wasn’ t) or because he’s learning and improving important things now when thrown directly into the fire.

No, just the change itself ties O’ Brien’s hands.To make the exchange back now would not only bring a completely insecure Tom Savage back on the pitch, but it wouldn’t be an encouraging sign for Watson himself.

In any case, it is the next unfortunate chapter for O’ Brien, who came to Houston with the call of a quarterback expert.If Watson starts against the Bengals, he would be the ninth Texans-Starting-Quarterback since O’ Brien’s inauguration in 2014 – after Brock Osweiler (14 starts), Ryan Fitzpatrick (12), Brian Hoyer (9), Ryan Mallett (6), Savage (3), T. J.Yates and Case Keenum (2 each) and Brandon Weeden (1).

In spite of all this, the game is relatively open on Thursday, because the Bengals had similar problems against Baltimore.At the 0:20 defeat, Cincinnati allowed five sacks and the problems that had to be feared before the season came true: last year, the Bengals already had serious problems on the line, with Andrew Whitworth and Kevin Zeitler leaving the two best Linemen Cincinnati in the off-season.

Ogbuehi alone allowed two sacks and two hurries against the Ravens, the interior line was almost worse than the tackles.And Andy Dalton is a quarterback who needs a clean pocket more than many of his colleagues – when throwing against pressure his stat line on Sunday was: 2/6,13 YDS, 5 sacks.

“We still have 15 games to play.This one game will not determine our season.We can’t let that happen,”said Dalton, while head coach Marvin Lewis admitted:”I don’t know if I’ve ever seen such a disappointing game before.We’ve harmed ourselves with punishments from the beginning.We must not allow ourselves to do these things.”