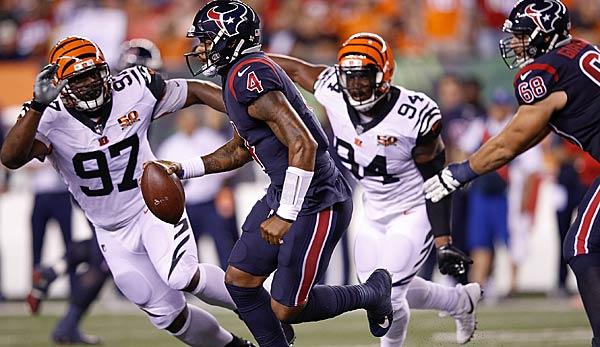 The false start of the Cincinnati Bengals (0-2) is perfect.At the start of Week 2, the Bengals also lost their second home game, against which Houston Texans (1-1) the offense experienced the next debacle.Cincinnati remained without a touchdown and thus provided historic figures, while Houston’s Deshaun Watson was able to celebrate a victory at the start debut.

Texans coach Bill O’ Brien was hesitant in the run-up to the game, but as everyone had expected, it finally came to pass: Watson started instead of Tom Savage, and in the first game O’ Brien had already made the quarterback exchange during the match.

All in all, the game was dominated by the Defenses and especially the Defensive Lines, as expected against two of the weakest offensive lines in the NFL.Cincinnati couldn’t even make a difference in the Run Game (3.4 yards per run), while Andy Dalton (20/35.224 YDS) delivered another big part of the desolate game.

Deshaun Watson (Quarterback Texans):”I wasn’t nervous.Football is football.But every Big Play gives you self-confidence – you just have to take it step by step.Of course, it is also something special.That’s what I’ve always dreamed of, I always wanted to be an NFL player.This victory is for the whole city of Houston.”

Marvin Lewis (Head Coach Bengals, about the quarterback question):”I’m not worried about Andy.In my eyes, he didn’t take a step back.We have to keep him doing his thing.We need to get better around him.Today we weren’t good enough, we didn’t play well enough on the offensive, and we defensively allowed a play that we shouldn’t let happen.”

If you want to take a lesson from this game, it’s the: A good offensive line is more important for a quarterback than a full-filled elite weapons armory.The Bengals allowed 13 quarterback pressures against Houston, six of which were wholly owned by Right Tackle Jake Fisher.Cincinnati’s offense is extremely limited with this line, as feared in the run-up to the season, this also has a massive effect on Andy Dalton’s game.Against a dominant J. J.Watt and Co.for the Bengals.

Sometimes it is not easy to choose the scene of the game or the click point – in this case it writes itself almost automatically.Houston’s only truly explosive offensive moment in this game was the 49-yard touchdown run by Deshaun Watson one minute before half-time break.It was a team product: The line blocked well, the receivers blocked Downfield well and Watson showed what his great strength over Tom Savage is at the moment, despite all the difficulties that still exist in the passing game.

In addition to the dominance of the defensive lines, Hopkins is one of the most offensive ones, which is still one of the best catch-in-traffic receivers and can become extremely important for Watson’s development.Houston’s star receiver has already received 29 (!) targets over the first two games, 13 of them against Cincinnati.In the last twelve years it has only been the 13th time.It was the third time that a receiver had received more than 13 targets and more than 54.2 percent of the total targets. 73 yards (from Watson’s 125 passing-yards) were in his account at the end of seven catches.

The pure statistics don’t read as devastatingly as the game sometimes looked like.Dalton had several passes – even at critical moments – which flew over his receivers more than clearly, as expected, in a shaky pocket his technique suffered significantly.One must also criticize him for not looking for his best receiver at least a little more often in such a game: Although Houston lost two cornerbacks (Johnathan Joseph, Kevin Johnson – presumably both injuries not serious) in the course of the game due to injury, A. J. saw.Green a whole seven targets.In the second half of the game, Green was at a catch for three yards.