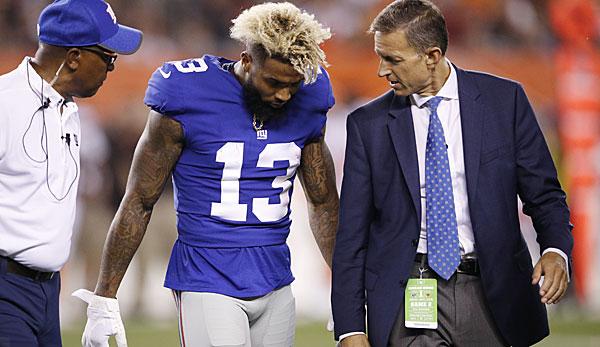 Job news for all New York Giants fans: The comeback of Odell Beckham Jr.could apparently drag on for even longer.The Wide Receiver spoke on Thursday after the training of a so far unknown schedule.

Beckham told reporters after the unit in which he was officially listed as “limited” that his ankle injury was a matter of “six to eight weeks”.Beckham had injured himself against the Browns three and a half weeks ago in the preseason game.

The news came as a surprise.NFL network insider Ian Rapoport, for example, reported that Beckham’s mission against Detroit Lions on Monday evening was “much optimism”.After all, Beckham also explained after the training on Thursday that he had felt as good as never before since the injury.

The Giants had already been very reserved in the forefront of the first game – which the receiver then also missed -.Coach Ben McAdoo only explained at the time that Beckham was judged” from day to day.If the 24-year-old’s latest forecast is correct, it could be around four weeks.