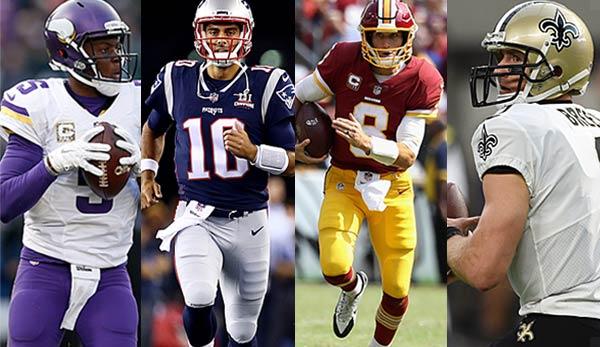 For the Cincinnati Bengals there was the second offense debacle in the second game of the young season.Quarterback Andy Dalton also experienced another bad game marked by a desolate offensive line – and so the Bengals could potentially join a more than interesting list: the 2018 quarterback market is already promising high tension.

Bengal coach Marvin Lewis’s announcement to Dalton’s job security question was clear:”I’m not worried about Andy.In my eyes, he didn’t take a step back.We have to keep him doing his thing.We need to get better around him.Today we weren’t good enough, we didn’t play well enough offensively.”

It was the statement you would expect from a coach after the match.But the tape speaks a different language: Dalton seems to be extremely bumpy technically, throwing several yards over receivers and can’t use matchups in the defense.Play calling is of little help to him in any case – Lewis’ job could be hanging by a thread sooner rather than later.

Already after the match against Houston, A. J. was already circulating, not only at the press conference.McCarron, Dalton’s backup.It cannot be ruled out that Lewis will eventually – if only out of desperation – pull the rip cord called Quarterback change.In the most extreme case, Dalton could thus become an interesting candidate for an already packed quarterback market in 2018: The Bengals can release him after the season with a dead cap of only 2.4 million dollars.

This market could be a explosive mix of unusually high quality and at the same time also contain teams on a concrete quarterback quest, a potentially exciting Free Agency is coming up.And with many teams, the first view – apart from the draft, of course – could be towards Minnesota.

It’s the big question in the far north, which already causes a lot of Vikings fans stomach ache.Teddy Bridgewater is an absolute fan favourite and has shown very promising quarterback approaches – at least.But his serious knee injury forced him into hospital in the long run, so he missed the entire pre-season and is not available at the moment.A comeback in the course of the season seems possible.

In his absence, however, Sam Bradford, after Bridgewater’s injury, has committed himself to a last-minute emergency solution in Minnesota a few days before the start of the 2016 season.Behind a sometimes absurdly bad offensive line, Bradford got the most out of last season’s campaign, the start against the Saints was – after a few well-known, frustrating check down passes – a show.

This also brings us to the next season, when the contracts of both quarterbacks will expire.If Bradford holds the level he has shown, there is no way around him.But if Bridgewater is fit, he will want to play as well – and both quarterbacks are still under 30 (Bridgewater 25, Bradford 29 years old).

The vikings will have to decide sooner or later, and the loser of this decision could quickly become a top option on the market.

At the same time, this decision has an additional twist: the contract situation is a bit opaque, but it can be assumed that Bridgewater’s last contract year will be repeated as he spends the first six seasonal matches on the PUP list.But even in this scenario, however, Minnesota must at least make a decision in the case of Bradford, and this will presumably affect Bridgewater.In one way or another.

New Orleans may also be facing an interesting summer.In recent years, the Saints have invested resources in defence, at least in draft, with the constant aim of providing a semi-functional defensive side to the always excellent offense.This might be enough for the playoffs, but the season opener against the Vikings was sobering in this respect.

And so the Saints could be at a crossroads after the season.Drew Brees is 38 years old, his contract ends after the current season and reports indicate that the contract contains a clause prohibiting New Orleans from using the Franchise Day for Brees.

Brees has so far been relaxed, when asked about a contract extension – a career end seems to be no option for 2018.But what if the Saints break in defensively again?When Brees has a chance for a team with contender defense and a better cap situation?And above all: What if Head Coach Sean Payton finally breaks off the tents in New Orleans?The Saints could actually be on the verge of a new beginning.

Page 1: The Bengal problem, abdominal pain in Minnesota – and what does Brees do?