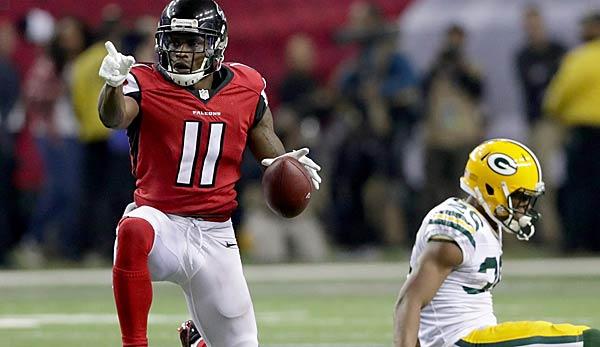 The Atlanta Falcons open their brand-new Mercedes-Benz Stadium and call for the Green Bay Packers (Monday, 2:25 a. m. live on DAZN).These don’t get into a celebratory mood, however, but with the memory of a brutal defeat in the past NFC Championship game.However, a lot has changed since then.

The Green Bay Packers won eight games in series between November 2016 and January 2017, and Aaron Rodgers led his team to the NFC Championship Game with an impressive performance boost in the second half of the season.In the post-season, they won in hard-fought duels against the defensive New York Giants and the euphoric Dallas Cowboys.

The resulting hospital was too big in Atlanta.The defensive showed too many question marks, especially in the secondary and the opponent was simply too strong.Matt Ryan and the Falcons’ firepower were wearing the Packers down by every trick in the book.Head coach Dan Quinn’s team was already leading the break with 24 points.

Ryan and Julio Jones took advantage of every weakness of the opponent, every gap that arose.The later MVP dismantled Green Bay with 392 passing yards (271 of them alone in the first half) and four touchdowns as well as a rushing score.Jones caught nine passes for 180 yards and two touchdowns.The Falcons ruthlessly put up 493 yards and 44 points at the end of the day.It was a show of the best offense in the NFL, which Rodgers couldn’t resist enough.

The one who was supposed to defend Jones that night as Cornerback number one was LaDarius Gunter.An unpunished Free Agent who, due to injuries, took on the difficult role.Only eight months later, Gunter was dismissed by the Packers, that was last Tuesday.It is a symbol of how the situation has changed around Green Bays Defense.For the better.

The activities in the off-season already seem to be making themselves felt.With them House got a Free Agent on board and Damarious Randall and Quinten Rollins returned from their injuries.As early as Week 1, the Seattle Seahawks were able to give a first impression of what could be part of the agenda in Green Bay.

In addition to the offensive output of Aaron Rodgers, who ran hot at 28 completions of 42 pass attempts and a touchdown pass on Jordy Nelson, especially in the second half, the defensive side of the ball was a reason to be happy.Lineman Mike Daniels, whose strong performance was underscored by a statline of 1.5 sacks and a Forced Fumble, was of course the most striking player in the group.Especially interesting, however, was a rarely seen defensive formation.

In an unusual 4-3 formation with Kentrell Brice next to Ha Ha Clinton-Dix on Safety, Russell Wilson (14 of 27 successful passes) and an admittedly limited offensive line were kept at 158 yards.Safety Morgan Burnett often positioned himself as an inside linebacker in the nickel formation.However, there were no problems in the run defense.

This formation, in which the packers set much more store by speed than size, could also be used increasingly on Sunday for a much more difficult task – also against the running backs in the passing game.

Contrary to the limited offensive possibilities of the Seahawks, however, just under 5,000 passing-yards of Matt Ryan, the fourth-best passport rating of all time and 540 points of a team that placed eighth in the eternal scoring list last year, are now waiting.

“We’ll just do what it takes to slow down their offense,”says Cornerback Randall before his matchup with one of the top three receivers,”You’ve got more than just Julio.They have several great players.”

The Falcons themselves, however, had some unusual problems in the offense last week in Chicago.While Ryan played 321 yards, one of them for an 88-yard touchdown by Tight End Austin Hooper, the running game didn’t work as expected and confirmed the impression from the preseason.

The most successful running play did not go beyond seven yards.The focus was on the offensive line around Wes Schweitzer, which was boiled down several times by Chicago’s defensive end Akiem Hicks.Not a good basis in view of the upcoming match-up with Green Bays Daniels.

“We don’t panic.It’s about getting better week after week,”said Ryan after the 23-17 win over the Bears, who lost their chance of a last-minute win at 4th and Goal mainly because of their own nerves,”The good teams I’ve played in so far have improved over the course of the year.The first-game experience will do us good.”

During the Packers Defense for the duel with Ryan and Co.seems to be better equipped than in January, the Falcons are still flying a little bit below the wheel.Atlanta improved from 28.8 points to 21 in the last season after the ninth game.

Desmond Trufant, who is out of action in the playoffs with a chest muscle injury, is back and Vic Beasley’s linebacker colleagues Deion Jones and De’ Vondre Campbell as well as Safety Keanu Neal and Cornerback Brian Poole pose dangers in their second season, which Aaron Rodgers also has to watch out for.

“You’re getting a little older and you’re now playing in the same system for another year.You are talented, well-trained and disciplined.”

Expectations of a shootout between Ryan and Rodgers should probably be reduced a little bit.Falcons and Packers no longer stand exclusively for open and closed.The defensive side of the ball is now also working more than reasonably.

So maybe it depends on the extra motivation factor.But both teams carry the so-called “chip” on their shoulders.While the Falcons want to inaugurate their new and splendid fortress with a success, the Packers and Aaron Rodgers come longing for reparation.So everything is set up for a fantastic football evening!