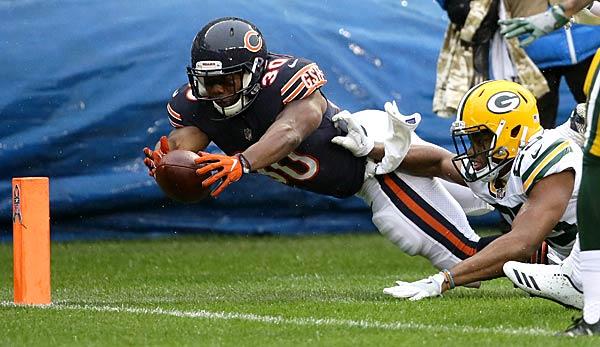 The Green Bay Packers won 23-16 at the Chicago Bears. The scene of the game happened in the middle of the second quarter, as a challenge turned the Bears’ first and goal into a touchback for the packers. The curious thing about it: The challenge came from the Bears!

With 8:09 minutes on the clock in the second quarter in Soldier Field, Bears-Quarterback Mitchell Trubisky threw a short pass on Running Back Benny Cunningham, who turned it into a 23-yard-catch.

Cunningham was then apparently brought to the ground just before the end zone, but touched the pylon with the ball while falling. The referees decided to go down by contact on the 2-yard line. But Bears coach John Fox was not satisfied with it and threw the Challenge Flag. What followed could not please him at all.

The video images showed that Cunningham lost the ball before it hit the ground and before the leather touched the pylon. Thus, the first and goal became a touchback and possession of the ball for the packers. The challenge went completely backwards for Fox.

“Obviously this is a play I would have liked to have had back, but that’s not how it works,”Fox explained after the game.