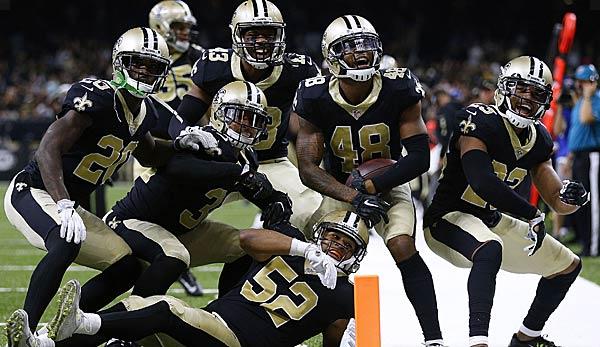 The New Orleans Saints have been waiting for a playoff for years. 2017 has been running very well so far and could bring a happy ending, even though the superstar is ahead of others. SPOX looks into Bayou and explains what has changed and why the new approach works.

Even if you’d only been following the NFL casually in recent years, you’d know about the New Orleans Saints: they’re a pass-heavy team! Drew Brees has been leading the league for the past three years and five times since 2011. Although this was generally not very successful, it was the character of the team.

2017, however, presents a completely different picture. Not only since the dominant canter victory at the Buffalo Bills (47:10) in Week 10 is it clear: This is now a team that thrives on its running game. On Sunday the Saints ran for nearly 300 yards and six touchdowns without punching once. The Chicago Bears last achieved this in 1941.

And that’s not all: in the third and fourth quarters, they ran 24 consecutive moves! Nobody has done that since 1989. And why is that? This is a passing league dominated by quarterbacks, isn’t it?

Not if you ask the Saints of these days. They turn the clock back to a certain extent and rely on qualities that today seem to be an anachronism. Defense and running game, which nobody has tried for years as a formula for success number one.

The causes of this approach are speculative. It could be because of the fact that Quarterback Drew Brees is so slow at 38 years of age – during the week it became known that in Bayou you think about what will happen next year when the contract of the only Super Bowl winner QB of this franchise expires.

So is it the end of an era? Maybe. But first the troop seems to be preparing one last long run – with a powerful run game!

The Saints started the season with superstar Adrian Peterson, who was supported by Mark Ingram and third-round pick Alvin Kamara in the Backfield. Since then, the latter have been running everything down to earth, while AD has literally been sent into the desert.

The fact that the Bills were overrun on Sunday, however, was not an anomaly. Head coach Sean Payton is playing as many moves this year as he has since 2009 – the figure is close to 44 percent. Like when the team won the Super Bowl! What’s more, in almost 43 percent of the snaps in the first half of 2017, Payton is betting on the race – by far the highest value since Payton and Brees make New Orleans insecure!

“We have indeed committed ourselves to the coaching staff, the players, all of them,”explained Ingram, explaining the new courage to run:”The big boys in front do a great job and the coaches decide for the right running moves.”

Open alone – and that was never the problem of the Payton-Brees-Saints – won’t win that many games in this league. And the seven that have been so far were all in series. After the 0-2 start, New Orleans turned up and hasn’t lost any more. The last time the Dallas Cowboys succeeded in such a sequence was in 1993 – they also won the Super Bowl at that time.

At least as important as the offense is, of course, the defence and the outstanding development that this team has taken within the last few months. In the first two games, the Saints scored 64 points and over 1,000 yards in the defeat of the Vikings and Patriots.

Since then, however, the Saints have only swallowed twice more than 13 points in seven games – 38 on 52:38 against the Lions and 17 on 26:17 against Green Bay. In addition, a shutdown against the Dolphins took place. What a turnaround!

How was that possible? Well, since Week 3, New Orleans has managed better than any other team to impede the opposing quarterback. In terms of total QBR, the opponent’s passers-by were 26.5 from Week 3 to Week 9, while Tyrod Taylor was only slightly higher at 29.7. Plus, the Saints give out only 4.5 yards per play. And the Defense forced 13 turnovers in the last seven games.

The passport defense was consequently much better after the first two weeks. At that time, if 11.2 yards per pass attempt was allowed, it was only 5.3 yards. Defensive Coordinator Dennis Allen’s much more aggressive play-calling is the reason for this: The flash rate rose from 27 percent at the beginning to 42 percent. The Defense keeps the quarterback under constant fire and thus enforces the mistakes.

Especially defensive End Cameron Jordan is worth mentioning here, as he has already collected seven sacks. In 2016 there were a total of seven and a half. His career best mark of 12.5 (2013) is thus within reach.

In addition, there is the way the Secondary operates. Especially a rookie played himself in the foreground. Cornerback Marshon Lattimore, the eleventh pick in this year’s draft, does things that no rookie has done for a long time: The former Buckeye has already forced a fumble, caught two picks (a pick-six) and six pass breakups on the account. Since 2001, no rookie has been able to do this!

With a record of 7-2, the Saints are now heading steadily for their first playoff since 2013 and their first divisional title since 2011, and they could also win a first-round bye for the first time since 2009.

At the same time, this would mean at least one home game in the postseason, which has not happened since 2011. But this may not even be so important in view of the new philosophy. We all know the story that the Saints have never won the playoffs in a foreign place, but this could have been due to the phenotype of the team.

They have always been a dome team, a finesse team, a fair weather team, if you will. The passing game was in the foreground, the run and also the defense were mostly optional. In the Dome this is not a problem, as there is no wind and no snowfall. With the running game and the defence of the Saints, however, these optimal conditions may not play such a big role any more.

Whoever can move the ball in the NFL – to control the clock – no matter what conditions, is also prepared for a successful January and maybe even February. Their opponents are noticing that too. Wide Receiver Kelvin Benjamin, who has been overrun twice against the Saints by his trade from Carolina to Buffalo and has known them well for years, admitted:”This is definitely another Saints team. You play with more confidence. They just fly around and you can see they’re having fun. They’re a unit and they play for each other.”

Of course, New Orleans has been lucky lately. Luckily, the Packers Brett Hundley made its first start after Aaron Rodgers’ retirement. Or maybe it wasn’t Jameis Winston, but Ryan Fitzpatrick for the Bucs ran up against them. But the team as a whole, however, is well prepared for the tasks ahead.

Among them a guest performance of the Redskins at the Superdome, as well as a West Coast trip to the really hot L. A. Rams. In addition, there are still two more times against the Falcons, but the New Orleans Saints will certainly not have to hide from anyone in 2017. It’s literally too good for that.