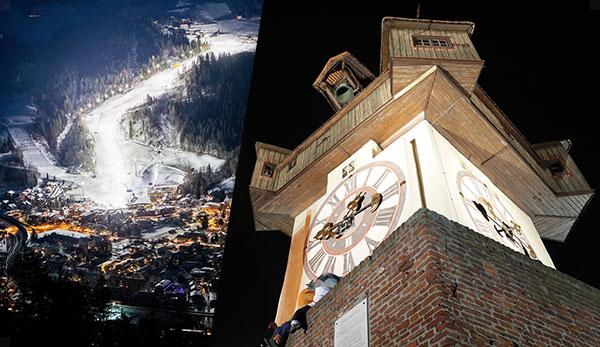 On Thursday, the 48 municipal councillors in Graz are to vote from midday on whether Graz – together with Schladming – will apply for the 2026 Olympic Winter Games. The majority of them are certain that there is a continuing political debate about the costs. The second-strongest faction in Graz, the KPÖ, wants a referendum on the holding of games.

The parties of the proponents, the ÖVP under Mayor Siegfried Nagl (19 mandataries) and the FPÖ under Vice Mayor Mario Eustacchio (8 seats), have the majority over the 21 deputies of KPÖ (10), Grünen (5), SPÖ (5) and NEOS (1). In Schladming at the beginning of February, the local council unanimously voted for an application together with Graz.

In Graz, however, there is scepticism and resistance from the other city hall parties, especially with regard to costs. The second-strongest faction, the KPÖ under city councillor Elke Kahr, is already collecting signatures, around 3,700 so far, in order to submit the Olympia project to a referendum. In the beginning there was a strict no from Mayor Nagl to this questioning, meanwhile this could not be seen so strictly.

The vote is about the fact that Graz can write a letter of intent, a declaration of intent, which will then be signed together with Schladming by 31 December. It can be submitted to the International Olympic Committee (IOC) on 1 March. At the same time, the resolution is intended to make it possible to establish a corresponding Olympic company “Grazer Winterspiele 2026 GmbH” in spring. A feasibility study will then be available by June. Graz/Schladming would then be given the status of a “Dialogue stage interested city” until October. The IOC would then nominate the candidates, this “candidate city process” would run from October 2018 to September 2019. The Olympic Winter Games and the Paralympics would then be awarded in Milan in the autumn of 2019.

So far, little has been known about the costs. Schladming’s mayor Jürgen Winter spoke of a total of 416 million euros at the moderately visited citizen information desk on Monday evening in a hall of the Messecenter Graz. These should come with 195 million euros from the federal, state and local governments, 221 million euros from private investors. The IOC is to contribute around one billion euros. However, these costs do not yet include expenses for security measures. The problem is that the covenant is very restrained.

Graz and the province of Styria have little financial leeway. The city has over a billion euros in debt, the country to about five billion. The latter has imposed an austerity course on itself, and SPÖ-Finanzlandesrat Anton Lang had let it be known in a state parliament meeting at the beginning of February on the subject of the Olympics that “from the current perspective, there is not the slightest margin in the state budget”.

Sports Minister and Vice-Chancellor Heinz-Christian Strache (FPÖ) had in principle been able to warm up for the Olympic Winter Games in Austria during an APA meeting in mid-February. However, for an application Graz/Schladming 2026 there must be broad support. As a regional politician, he would “act in such a way that I take the population with me”, Strache said.

In any case, an Olympic flame – the Special Olympics 2017 in Graz and Schladming – is already shining on the homepage of the city of Graz, whose successful implementation is said to have brought the idea to Nagl and Winter’s attention.