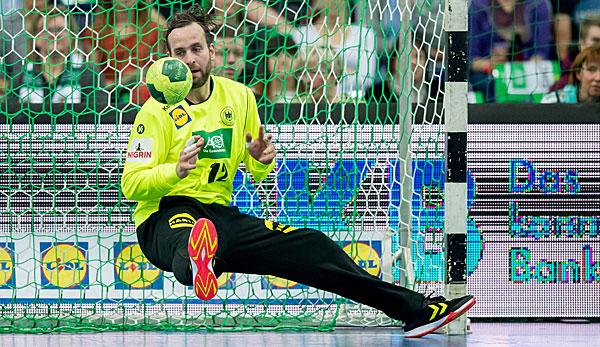 Silvio Heinevetter spoke about the previous dispute between the DHB team and national coach Christian Prokop. The goalkeeper admitted tensions and misunderstandings, but is now optimistic about the future, also due to structural changes.

“The handling of the mistakes at the European Championships was hard, open and honest from all sides – from the coach to us players. Tacheles was talked about,” said Heinevetter of Sport Bild: “I am convinced that this will be an attempt at better times.

At the European championship in Croatia in January, the DHB had given a desolate picture. This was not so much due to the poor sporting performance itself (end in the main round) as to the team’s performance. The team did not function as such, the bad mood between players and national coach was literally tangible.

One incident in particular caused a sensation that lasted for days. Before the all-important match against Spain, which was lost 27-31 after a disastrous performance, the training between team and coach is said to have been so bad that the unit was broken off.

“There was no abortion”, Heinevetter denied and said: “We thought we were sweating loosely. Christian wanted another crisp unit. It was a misunderstanding. However, we have greatly improved our communication. “There’s never gonna be another situation like in pre-Spain practice.”

According to Heinevetter, one reason for the improved communication is the introduction of a previously non-existent team council, which was apparently the explicit wish of Prokop. This consists of Captain Uwe Gensheimer and the two Kielers Patrick Wiencek and Steffen Weinhold.

In addition, team manager Oliver Roggisch, who had a more representative role in Croatia, is now on the bench during the matches. “Everyone has more responsibility,” said Heinevetter.

Another annoyance during the European Championships was Prokop’s tactics, with which at least parts of the team did not agree at all. The 39-year-old was accused of annoying his players with too many tactical details and thus depriving some players of their strengths.

“When he became national coach, Christian wanted to do his thing on his own,” said Heinevetter: “The tactics are now more aligned so that the strengths of the players come into their own.

As an example, Heinevetter cited the rear shooter Julius Kühn, who was completely unsettled during the European Championship. “Julius doesn’t have to give the ball to create something. Julius gets the ball to throw on the goal,” said the goalkeeper, who has been part of the DHB team for 12 years: “Tactics are important, but they must not slow it down.

Heinevetter does not believe that Prokop has lost his authority over the team through his erroneous actions and his current admission of guilt. The Berlin native praised the national coach as “technically highly competent” and said: “It shows his greatness how self-critically and openly he worked through the European Championship. And yet he’s still absolutely the boss.”

Rather, Heinevetter sees it as the duty of every single player to critically question himself. The team was sometimes too sensitive and had to cope with things not going as desired.

“To exaggerate a little: Our players don’t care if we are trained by Müller, Meier or Prokop. We want success. Christian wants him too,” says Heinevetter.

Handball: Barcelona lose for the first time in 146 games without defeat
Handball: Kim Ekdahl Du Rietz moves from the Rhine-Neckar Lions to PSG