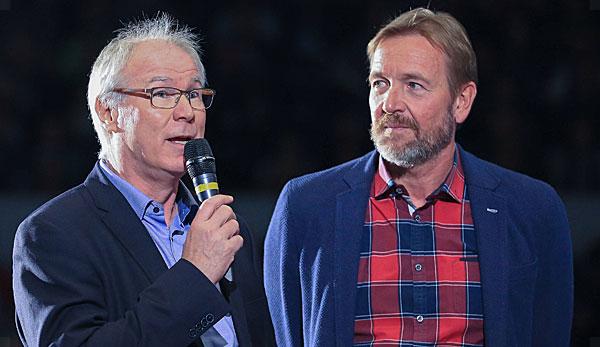 This weekend for the second time in a row the final four of the Handball Champions League (Sat., from 3.15 pm in the LIVETICKER) will take place without a German participant. In an interview with SPOX, Uwe Schwenker, President of the German Handball League, revealed his assessment of the situation in German handball.

The 59-year-old also spoke about a possible reduction of the HBL, the conflict with the European Handball Federation (EHF), his former club THW Kiel, national coach Christian Prokop and the possibility of joining clubs such as FC Bayern or Borussia Dortmund in handball.

SPOX: Mr. Schwenker, for the second time in a row the Bundesliga is not represented at the Champions League Final Four. Do we have to worry about the German club handball?

Uwe Schwenker: We have to take a differentiated approach. Since 2007, one German club has won the Champions League five times, and in 2014 even two HBL clubs, Flensburg and Kiel, were competing in the final. Against this backdrop, I am not at all concerned about the current performance in the last two years, especially as our best clubs are still able to beat any other team. However, it is clear that it is a challenge due to increased competition to live up to our self-image as a major handball nation also in the future.

SPOX: What is the reason why the HBL clubs did not radiate this dominance any more?

Schwenker: This is a complex topic. Basically, however, it is not the case that Germany’s top clubs are no longer competitive at the highest level. The Rhine-Neckar Lions retired in the round of 16 because they sent their second team to Kielce to defend the championship title due to a collision with the Bundesliga match against Kiel. In the quarter-final against defending champion Skopje Kiel was completely at eye level and only one goal was missing in the end. And Flensburg got a used day at the return leg in Montpellier. We should not forget the EHF Cup, which no German team has won in the past 15 years. We are therefore still very well positioned by international standards.

SPOX: Nevertheless, you stressed that German clubs have to do their homework. What exactly does that mean?

Schwenker: The clubs’ homework is to create the economic and sporting conditions to be at the forefront. I would like to emphasise at this point that I have complete confidence in the people working on the ground. But it is also a question of setting clear goals, creating the framework conditions for them and then pursuing them with priority and emphasis. Do I want to become German Champion, do I want to become Cup Winner or do I want to make international progress? Every club must ask itself these questions and equip itself accordingly.

SPOX: In this context, German clubs in particular complain of the enormous burden as a competitive disadvantage.

Schwenker: The HBL is very balanced at a high level and the burden is correspondingly higher compared to all other leagues abroad. Incidentally, this is what makes our Bundesliga so successful and sought-after. The players who compete in the championship, cup, international competition and then in the national team will indeed complete a demanding programme. Nevertheless, the story also begins in the mind. It is certainly not helpful to deal too intensively with the topic of overload and to focus on it. It is much more important to create suitable focal points and framework conditions. And there is also the financial aspect. On the one hand they complain about the excessive burden, but on the other hand they want to be in the Champions League because there is a lot of money involved for clubs and players.

SPOX: Most recently, Stefan Kretzschmar called for a reduction of the HBL from 18 to 16 teams not to be a taboo subject due to the high load. What do you say to that?

Schwenker: The topic is not new. You can talk about almost anything. The fact is that the Bundesliga consists of 18 clubs and is therefore successful. If you want to change the number of clubs, you have to form a majority of our members. Exactly this majority is currently pleading for the preservation of the current Bundesliga strength.

SPOX: So what support can HBL give the clubs in terms of stress?

Schwenker: We at HBL naturally want the clubs to be successful in the Champions League. This is another reason why some of the clubs have justified claims against the HBL. We should be able to draw up a match schedule that will take the best possible load off the clubs in the decisive months of the international competitions with regard to the Bundesliga events. So that our international flagships can concentrate on the quarter-finals and the final four of the Champions League. Clubs should be given some time to better prepare for international challenges. That’s a demand I have of ourselves, here we have to make the optimum possible.

Successes as a player

Silver medallist at the 1984 Olympics

SPOX: What’s so complicated about that?

Schwenker: You must not forget that handball is an indoor sport. Most of the time the halls are not as fully available as we would like them to be, because they are used for all kinds of events and are booked well in advance. That is why it is all the more important that we succeed in drawing up national and international fixtures that allow better planning overall. Of course, our national team also plays a role here. We have a good relationship with the DHB and are happy to give the national team the freedom they need to prepare for highlights. As a Bundesliga team, however, this again cost us match dates. We have to coordinate once again with the DHB and the clubs in order to create the best possible framework conditions for everyone involved.

SPOX: That didn’t work so well with the EHF this season. There was an absolute super-GAU in terms of collision of dates, which is why the lions had to send the second team to Kielce for the CL game, as you mentioned at the beginning. The Mannheim team had to compete in the top league and in the Bundesliga on the same day.

Schwenker: Everyone can see that this is something of a sports-political nonsense. No one really had anything of that story. However, the example of the Rhine-Neckar lions shows that there is a difficulty already mentioned. The SAP Arena is one of the most frequented multifunctional halls in Europe, which does not make things any easier for handball. All the more reason we need a reliable schedule for matches in the Champions League. And as early as possible. For the coming season, we have essentially agreed to hold home matches on Wednesdays, while until now we have had to keep a period of time open from Wednesday to Sunday. Nevertheless, deviations are also to be expected in the coming season. At the latest with the Champions League reform in 2020 there will be fixed dates for playing.

SPOX: However, the fronts between HBL and EHF seem to be completely hardened in this area.

Schwenker: In recent weeks and months, there have been clear discordances between HBL and EHF. However, this has never led us to stop the dialogue. We’re still talking. Both HBL and EHF must return to the path of reason and find a solution in the sense of handball. We need each other. We want the German clubs to compete in the international competitions of the EHF, while at the same time the EHF is aware of the value of the HBL clubs and the strength of the German market. I am quite sure that we will soon find our way back to a good working level.

Page 1: Swivel via a HBL reduction and the Zoff with the EHF