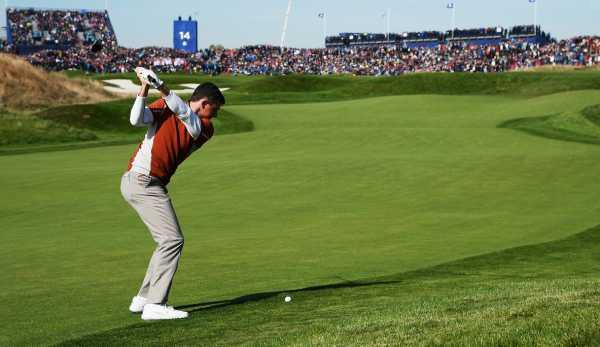 Team Europe is entering the last day of the Ryder Cup today, Sunday, with a comfortable lead. The Europeans played their way to a 10:6 lead on the first two days. SPOX has the most important information about the event and its broadcast on television and livestream.

Unlike all other major golf tournaments, the Ryder Cup is not about prize money or world ranking, but about prestige. In addition, it is not individual athletes who compete against each other, but Team USA against Team Europe. The event takes place every two years.

Already six years ago Team USA managed to win after a 6:10 gap. The US golfers got the exact counters they needed at the time (8.5 points).

The pay-TV channel Sky has the exclusive broadcasting rights for the Ryder Cup. Sky has set up its own channel for the tournament for a short time: Sky Ryder Cup HD. In addition to the live broadcasts, background reports on the tournament will also be shown there. The channel is also available as a livestream via Sky Go.

Each tournament day Sky also shows one hour of live transmission free of charge on skysport.de. Today the transmission lasts from 12 o’clock to 13 o’clock.

SPOX also accompanies the tournament all the time via live ticker and keeps you up to date on all strokes.

The Ryder Cup in matchplay mode. There will be 28 games, in three different modes.

For every match you win you get one point, a draw leads to a point split. So it takes 14.5 points to win the Ryder Cup.

If the tournament ends 14:14 at the end, the cup remains with the defending champion.

Golf: Ryder Cup: Europe strong as an ox, but not yet at the finish line
Ryder Cup: Ryder Cup Coup! Team Europe writes a fairy tale