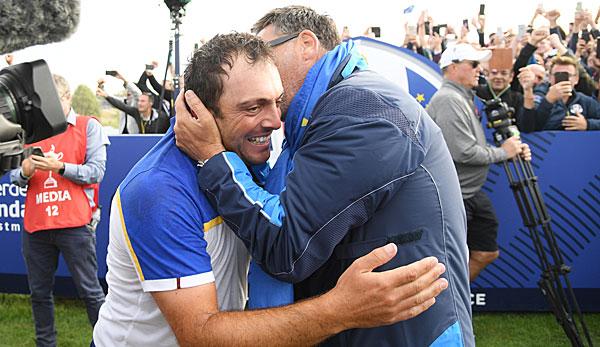 Europe’s golfers defeated the favourite US stars and reclaimed the Ryder Cup after two years of abstinence.

Just an hour from Disneyland, European golfers have written another Ryder Cup fairy tale on the outskirts of Paris. Captain Thomas Björn’s underdog team dethroned the favourite defending champion USA with a toothless Tiger Woods in front of more than 150,000 spectators on the three days of the Le Golf National with great shots and outstanding team spirit.

The decisive of the 14.5 points needed for the triumph went to British-Open Champion Francesco Molinari with his victory in the singles on Sunday against Phil Mickelson. The Italian Molinari was the first European to win all five possible points in a competition.

For the numerous fans of the European team, the Albatros Course became an island of bliss at the weekend, while the away curse continued for the guests. The USA, who ended the European winning streak with a 17:11 victory in Chaska/Minnesota in 2016, are still waiting for their first victory on the other side of the Atlantic since 1993 in Sutton Coldfield, England. “I can only take my hat off to the Europeans,” US captain Jim Furyk said impressed.

After a weak start on Friday morning (1:3) the challenger fought back, led by “Team Moliwood”. Molinari and Tommy Fleetwood (England) did not leave their rivals in all four fours the trace of a chance, three times superstar Tiger Woods belonged to their victims.

It was the first time that a European duo had achieved the maximum yield in the foursome. “What can I say? It was impressive,” said Thomas Björn about his model students. To top it all off, Molinari made the triumph perfect.

In contrast, Woods and the Ryder Cup did not fit together this year either. The 14-time major winner was pissed off on Friday afternoon, couldn’t hear the names Molinari and Fleetwood anymore and moaned: “I’m pretty pissed that I lost three matches. I didn’t even feel like I was playing badly.”

The negative series continued on Sunday, Woods also lost his singles against the Spaniard Jon Rahm (2 and 1) and remained without points for the first time in the Ryder Cup. And for the seventh time he left the course with the US team as the loser, only winning in 1999.

On the final day, fans along the fairways and on the huge stands on the greens experienced a roller coaster of emotions, they experienced the Ryder Cup pure and simple.

At 14.45 the Europeans were on their way to a possible record victory (18.5:9.5), but not even an hour later the tide threatened to turn. The Americans turned up the heat and, given the scores at that time, even had the 14-14 balance they needed in mind.

But the Europeans kept their nerves. When the Dane Thorbjörn Olesen surprisingly defeated Jordan Spieth with 5 and 4 and won the first match of the day, deafening cheers broke out on the layout. After Jon Rahm, the remaining successes were provided by “Mr. Ryder Cup” Ian Poulter (England) against world number one Dustin Johnson and finally Molinari.

In two years, the Americans will have a chance to revenge. The 43rd Ryder Cup will take place in 2020 at the Whistling Straits Golf Course in Kohler, Wisconsin.