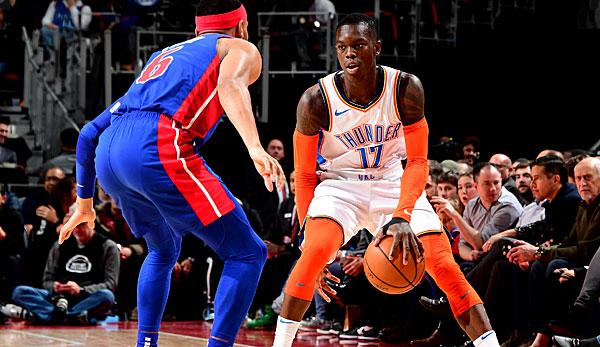 The Oklahoma City Thunder (15-7) set a clear exclamation mark with the 110:83 victory (BOXSCORE) against the Detroit Pistons (13-8). The hosts never really find their way into the game, while OKC dominates almost at will. Especially in the third quarter Dennis Schröder and Co. are getting away.

There were no personnel changes on either side at the beginning of the game, but after just three minutes Pistons coach Dwane Casey had to accept the loss of Reggie Bullock. The forward bent his left ankle during a drive and limped into the cabin.

From a sporting point of view, too, there was not much positive news for the landlords in the first quarter. Detroit had enormous problems with the strong defense of the Thunder and came in the first 12 minutes to just 17 points (season low).

Although OKC also had problems with the shooting, the guests still managed to take a two-digit lead, which they were able to defend for the most part in the second quarter and even extend to 15 points in the meantime. Only when Blake Griffin slowly but surely found his way into the game could the pistons shorten again and find their way back to the break tea within striking distance (50:40 OKC).

But after the page change the Thunder took control again. Russell Westbrook, who had been rather weak up to then, turned up 10 points in this section alone, and the pistons found no remedy against Steven Adams, who dominated the zone and only four minutes before the end of the third quarter had to accept his first miss of the match (up to then 7 out of 7 from the field).

Since nothing wanted to work out offensively with the pistons, Detroit fell apart bit by bit. Thanks to the strong line-up around Westbrook, Dennis Schröder, Paul George and Adams, the Thunder’s lead increased to 29 points towards the end of the third quarter. That was the decision.

The complete fourth quarter died at Garbage Time, in which Schröder led the Second Unit of the Thunder for a long time. The German delivered a strong performance overall, even though he held back a little in terms of scoring (12 points, 6/13 FG). But DS17 was able to convince with 9 rebounds and 6 assists with other facets of his game. In the end he had a plus/minus value of +25.

The latter was also true for Adams, who with 21 points (7/8 FG) in only 28 minutes was even the top scorer of his team (plus 6 rebounds, 2 blocks). Westbrook also scored 18 points, 6 rebounds and 6 assists, while Paul George played a double double (17 points, 10 boards).

On the pistons side, Blake Griffin was the best thrower with 20 points, but otherwise there was little positive from the home side. Andre Drummond finished the game with 13 points and 6 rebounds, Reggie Jackson remained pale with 10 points and 2 assists. Overall, Detroit sunk just 33 percent out of the field and 18.8 percent from downtown.

After five wins in a row, the Pistons had to suffer a solid defeat before the Milwaukee Bucks will be next on the road. The Thunder, on the other hand, continued their flight of fancy and celebrated their fifth victory of the past six games.

Steven Adams. The New Zealander did an excellent job both defensively and offensively. On the one hand it acted as an anchor for the strong Thunder-Defense, on the other hand it was at times simply unstoppable. The Big Man, however, also profited from strong passes from his colleagues, whom he exploited to a high percentage.

Reggie Jackson. After some good games before Jackson played against OKC, there was little or nothing to see. He didn’t manage to structure the offense of the pistons, but instead Detroit was always running out on one-on-one situations in the semi-field. His own scoring also suffered from this, as Jackson’s litter did not want to fall.

The defense of the Thunder is one of the best of the whole association so far – the pistons got to feel this on this evening. In the beginning Blake Griffin was taken out of the game with numerous double teams, later OKC concentrated more and more on closing the zone. Especially Adams and Nerlens Noel as shotblockers were rarely successful.