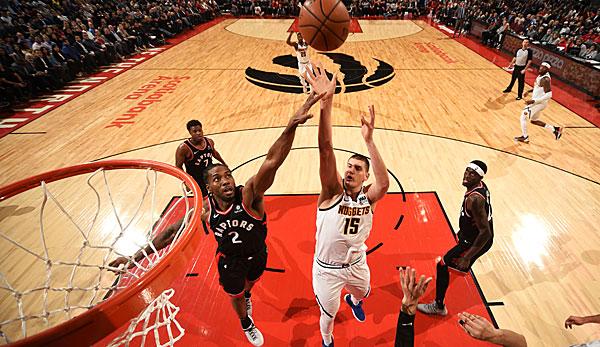 After eight wins in a row, the Toronto Raptors have received a damper. The Canadians have to accept a 103:106 defeat (BOXSCORE) against the Denver Nuggets. Against the outstanding Nikola Jokic no herb has grown in the end.

The duel between two of the best teams of the current season promised a lot of excitement in advance. After 48 minutes of high-class and dramatic basketball until the last seconds, it can be said without a doubt that this game met the high expectations absolutely.

Although Denver managed to get as far as 12 points in the middle of the third quarter, the lead was never really secure. On the one hand, the guests dominated the boards with 15 offensive rebounds, which led to strong 23 second chance points (TOR: 2). In addition, the Raptors caught a weak shooting evening (11/41 threes, 26.8 percent).

Nevertheless, Toronto fought their way back into the game, thanks mainly to the once again strong Kawhi Leonards. The claw scored 27 points (10/19 FG, 1/7 Dreier) and 8 rebounds, his most important goal of the evening came 7 seconds before the end. Previously Juan Hernangomez had shown nerves on the line and only turned one of his 2 free throws to 103:101 from Nuggets point of view.

The punished Leonard ice cold with a difficult fade-away jumper on the baseline for compensation. Then it got weird. During the subsequent inbounds play Serge Ibaka received a petty foul – free-throw and possession of the ball for Denver. Nikola Jokic did not miss the opportunity to put his team in front, after which Toronto had to commit a foul.

Jokic went back to the line and sank both free throws to the 3-point lead for the guests. Kyle Lowry (5 points, 1/7 FG) sent with the Buzzer still a quite good pull-up-three on the journey, but he only landed at the ring. Victory for the nuggets!

The outstanding man was without question Jokic, not only because of his sure hand from the free-throw line (a total of 7/8 FT). The Serbian also had a strong triple double with 23 points, 15 assists and 11 rebounds. Jamal Murray supported his Big with 21 counters, 8 templates and 7 boards, while Malik Beasley contributed 15 counters from the bench.

The only drop for the nuggets, who have now won six games in a row, was the injury to Gary Harris, who had to leave the floor in the first quarter with problems at the hips.