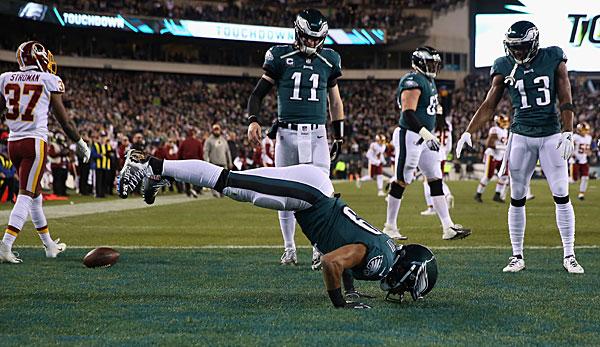 The Philadelphia Eagles have kept their playoff chance alive in the Monday Night Game. The 28-13 victory over Washington Redskins was dominated by Phillys Defense. On the Redskins side, Mark Sanchez made his debut because Alex Smith backup Colt McCoy was also seriously injured like Smith.

For the Philadelphia Eagles, the Monday Night Game against Washington Redskins was the first of five playoff finals. And the Redskins are probably the simplest of the remaining opponents. Philly started the game with a splendid drive over 12 plays and the first touchdown reception in green jersey for Golden Tate. Like at the Sunday Night Game a clear false start of Lane Johnson was overlooked.

The bagged Redskins-Offense didn’t take place at first and then at the beginning of the second quarter Colt McCoy injured himself backup quarterback. McCoy, whose injury turned out to be a fibula fracture after the first investigations, was replaced by Mark Sanchez, who was signed only two weeks earlier. And his first snap couldn’t have been better. The hand-off for Adrian Peterson resulted in an inside zone run, a 90-yard touchdown, the longest score in the 33-year-old’s career, and a 10-7 lead for Washington.

Philly regained the lead before the break with a 14-yard run from Darren Sproles, with Jason Kelce as the outstanding lead blocker. Sproles had scored his last touchdown in Week 16 of the 2016 season and has missed a lot of time since then due to injury. The Eagles did not give up the lead from this point on, because the Redskins Open simply never really got going. Also an interception in Josh Norman’s own end zone turned out to be only a slight rebellion.

With as many as 22 plays in which Washington’s offense had to cross more than 10 yards for a new first down, the challenge was simply too great for the Redskins’ decimated side. On the defensive side one was beaten again and again by option plays and screens. Carson Wentz (27/39, 306 YDS, 2TD, INT) used its slot receiver option Tate more than ever before. For Zach Ertz there was no answer at all from the Redskins. And so a touchdown from Nelson Agholor on a 4 yard slant route and two field goals from Jake Elliott were enough to take the game out of reach.

The Eagles are only half a game behind the wild card spot the Vikings hold, but they have the hardest remaining schedule of the NFL. The next day, the Redskins will travel to Dallas and L.A. to face the Rams, while Sanchez (13/21, 100 YDS, INT) Under Center will be on their way against the up-and-coming Giants next week.

The Redskins can be sorry for all the injury worries in the offense, especially when it comes to the Eagles’ Rush pass. They didn’t even have to make lightning attempts to get the Redskins quarterbacks into trouble. Outstanding was Cox, who was doubled over long distances by Chase Roullier and Tony Bergstrom and still could not be stopped.

It was clear that Washington’s offense would have great problems. But it was disappointing that the defense could be boiled down in the run defense. Washington had big problems setting tackles on the second level and just let the O-linemen of the Eagles, who set good second-level blocks over and over again, get him off his game.