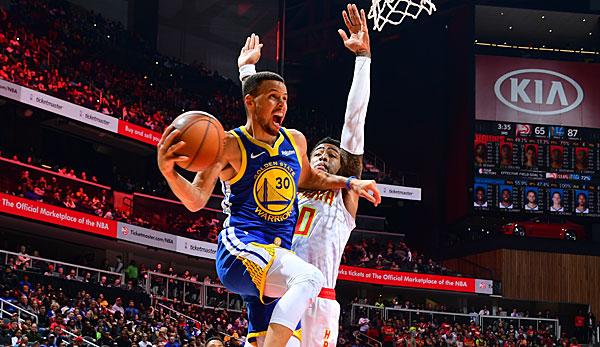 Stephen Curry was cooking – from the first minute on. Halfway through the first quarter, the Splash Brothers had 3 triples, 4 triples at the end of the first run (in 5 attempts) and 18 points on the Warriors star’s credit side, while the entire Hawks team scored just 17 points.

No wonder that the Dubs were already in front after 12 minutes with 34:17. And from the point of view of the Hawks fans, things really shouldn’t get any better afterwards. They showed humour when they started a “Draymond hates you” song in the direction of Kevin Durant, but the twice final MVP did not let themselves be impressed by it.

On the Hawks side, John Collins was the best thrower with 24 points (plus 11 rebounds), Trae Young came in on 20 points. But the rookie had enormous problems with his throw (8/20 FG, 0/5 Dreier) as well as with the ball handling (7 Turnover with 3 Assists). Atlanta even managed to get up to 9 points just before the half-time break, but the game was decided after the champion had dropped to 24 points in the third section.

This is a first for Alec Burks in the Cavaliers’ jersey! After 15 points against Boston and 13 against Toronto, the 27-year-old again scored 13 points in his third game after the trade to Cleveland – and also secured victory for his team with a cracking dunk a few seconds before the end!

Previously, the Cavaliers were the more dominant team for most of the game. A good six minutes before the final siren, the guests were even in front with 11 counters. But with a 17:6 run, Brooklyn still managed to equal the score. And then Burks came along.

The Shooting Guard pulled past Spencer Dinwiddie towards the basket, took off and hammered the Spalding to 99:97 3.2 seconds before the end through the cage. The potential game winner of Dinwiddie was afterwards too short and only landed at the ring. Victory for Cleveland!

After four defeats in a row before, the Cavs finally celebrated a success again. Not only Burks, but also Jordan Clarkson (20 points, 11 rebounds) or Tristan Thompson (19 and 14) had to thank them. On the other side Dinwiddie scored 18 points, D’Angelo Russell became the top scorer of the evening with 20 points (plus 8 rebounds and 6 assists). But he could not prevent the seventh bankruptcy in a row either.

Madison Square Garden seems to suit the wizards somehow. Since April 2013, the capital city hasn’t lost a single game in the Big Apple, and the Wizards have now left the floor as winners for the tenth time in a row. However, they made it unnecessarily exciting again and again.

Thanks to strong performances from Bradley Beal (27 points, 7 assists) and Kelly Oubre Jr (21 from the bank) Washington seemed to take control at the beginning of the third quarter. With a 28:8 run, the visitors turned the game around, but New York came back again. At the beginning of the fourth section, the Knicks had reduced an 11-point gap to just 2 points.

But Washington found the right answer. With 7 points in a row, the team around John Wall seemed to take control again – only to give up a 16-point lead again in the final minute. The Knicks, led by Tim Hardaway Jr. (20) and Damyean Dotson (17), simply didn’t want to get stuck.

Page 1: Curry on fire! Warriors sweep Atanta out of the hall