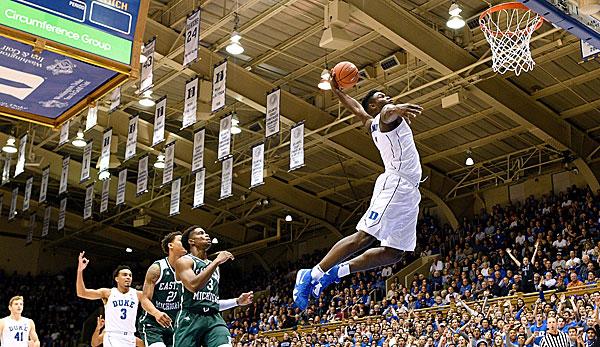 The Duke Blue Devils dominate the college basketball scene. Apart from a slip-up against Gonzaga, the top-class team around Zion Williamson and R.J. Barrett does justice to the huge hype. The NBA can look forward to a lot of spectacle soon. In the night on Thursday the Duke Blue Devils play at home against Hartford (live on DAZN from 1am).

It wasn’t the first time on this cool November evening in Durham, North Carolina that the 9,000 or so spectators at the Cameron Indoor Stadium were completely freaked out. And it shouldn’t be the last time.

A good ten minutes were played when the local Duke Blue Devils bounced the ball off the hopelessly overstretched Eastern Michigan Eagles with the help of a Ganzfeld press. Freshman Cam Reddish switched immediately, just behind the midline he operated his teammate via Alley-Oop-Pass: Zion Williamson took off, flew a felt eternity through the air and hammered the ball through the cage.

It was the fourth of a total of six crashing dunks of the Highflyer that evening – one more beautiful than the other, but none as impressive as this one. Williamson jumped so high, his eyes were at ring level. The hall exploded and so did the Internet shortly afterwards.

The video from Zion’s Monster-Dunk spread like wildfire in the social media; the Twitter post of the US broadcasting station FOX Sports South alone received almost 1.5 million hits. “It’s like the stuff that usually only happens in Cape Canaveral,” the commentator shouted his ecstasy into the microphone.

It seems as if Williamson, at the start of his college career, is starting exactly where he left off from high school in Spartanburg, South Carolina: as an athletics freak who demolishes the opponent’s ring facilities as a 2.01 metre giant weighing 130 kilos. As a Youtube sensation and social media star, the Instagram on Instagram has more than 2 million subscribers (almost three times as many as the Blue Devils). And as a future top pick in the NBA draft?

This is supported by the fact that Williamson must not simply be reduced to his spectacular dunks, which made him famous throughout the basketball world as a teenager. Despite his stature he moves excellently on the parquet, convinces with good court vision, plays hard in defense and can also act as a playmaker thanks to his good passing skills.

It was exactly this complete package that the forward to the start of his college career impressively proved. Only his jumper is still a bit shaky, but Zion is only 18 years old and still has enough time to work on this weak spot. Not college, though.

It is considered very likely that his time in the jersey of the Blue Devils is only of short duration. As a one-and-one-recruit, Zion started the season as number 3 in ESPN’s draft ranking. It is now regarded as the clear number 1 for 2019. “Don’t think too much about it,” a high-ranking scout is said to have recently said about Williamson’s rising draft share. Another said, “You mustn’t miss another unicorn.”

At the moment Williamson can only fight for his place in the draft sun with one team mate: his team mate R.J. Barrett. The Canadian joined Mike Krzyzewski and Duke as top recruit coaches in the summer and was able to convince in the first eight games with 23.1 points, 6.3 rebounds and 4 assists.

And that’s not all. With Reddish you’ll also find excellent shooters and highly decorated high school graduates in the squad. With him, Coach K has united the country’s three highest ranked high school players in Durham. It’s almost unbelievable what a top-class team the Blue Devils 2018 were able to put together.

Williamson, Barrett, Reddish and Co. confirmed the resulting huge hype in the first game of the new college season, when Duke shot the eternal rival from Kentucky out of the hall with a nasty 118:84 clap.

The three-headed monster made it immediately clear what the NCAA 2018/19 can expect: Barrett led his team with 33 points, Williamson with 28 (including one or the other monster dark) and Reddish with 22.

“They are a very good team”, Wildcats coach John Calipari, who in his 30-year career as head coach at college and in the NBA has never been downgraded with 34 points, had to acknowledge afterwards.

“We weren’t surprised that we won so high,” Barrett showed himself to be extremely self-confident after the game. “We know what we have here. We see it every day.” What Duke’s got is a lot of talent. Maybe even that much to go through the season undefeated? “If they keep playing like this, they won’t lose too many games,” Calipari said.

That’s exactly how it happened at first. The blowout against Kentucky was followed by clear wins against Army (94:72), Eastern Michigan (84:46), San Diego State (90:64) and Auburn (78:72). Granted: A real powerhouse of college basketball wasn’t there, but Duke underlined his high ambitions. Then, however, followed the damper against Gonzaga.

Only seven college teams in the NCAA’s long history have managed to survive a complete season without defeat. Indiana last did this in 1975/76 under the legendary coach Bobby Knight – the Blue Devils will not be able to join the list in 2018/19.

In the final of a high-class invitation tournament in Hawaii Duke had to admit defeat to the Bulldogs with 87:89. For the first time it became apparent that the top performers of the team are still young and, above all, inexperienced freshmen.

Barrett lost himself in the Crunchtime for example visibly in Hero Ball. In the last 57 seconds he took five throws – and didn’t sink any of them. Williamson could hardly see the ball and the weak Reddish was even sent to the bench in the final minutes.

But of course you don’t have to worry, after all the Blue Devils in the next match against Indiana were relatively unimpressed by the small setback and secured the next blowout (90:69) – and Zion delivered his next spectacular dark show.

Although the dream of the unbeaten season is over, the favourite status for March 2019 has changed little despite the slip. The bookmakers in Las Vegas continue to lead the Blue Devils as the clear number 1 in the country. Many experts take a similar view, some even go further.

“Do you want to tell me that this Blue Devils team wouldn’t be able to beat Cleveland with next year’s No.1 and No.2 pick,” asked ESPN analyst Paul Pierce at the beginning of November, setting a discussion in motion.

A discussion that comes up again and again in college basketball when a program dominates the action in such a way: Could the best team of the NCAA win against the worst team of the NBA?

Pierce, who went to school in Kansas by the way, is not the only one who answers this question with a clear yes. Former Duke star Jay Williams also attributes his ex-team a “legitimate chance” in the imaginary duel with the Cavs.

At the same time, there are enough fans and experts who consider such theses more than questionable. Even the Cavs are a completely different caliber than Eastern Michigan, Kentucky or Gonzaga. But could Williamson, Barrett and Co. at least annoy the Cavs? The fans will probably never get a real answer to this question.

NFL: Column: The new Pats-Defense – and who gets into the playoffs?
NBA: Bulls sack Hoiberg: Strangle course a la GarPax