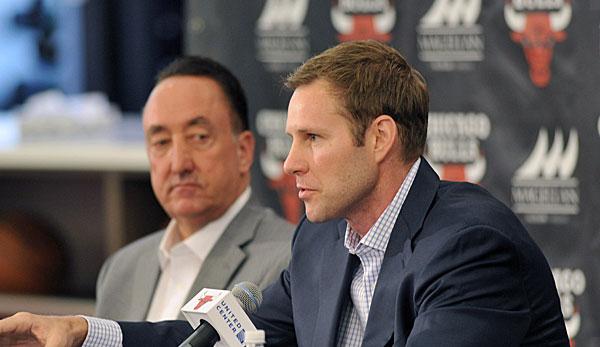 The Chicago Bulls pulled the rip cord and sacked head coach Fred Hoiberg after another weak start to the season. It is the right decision, but it comes far too late. Rather, the leave of absence underscores the Bull management’s slippage course of the past few years.

Fred Hoiberg was a coach in Chicago for three and a half years. It feels like eternity when you consider how often and sometimes heatedly the man on the bridge was discussed by the Bulls.

The expectations of the former college coach from Iowa with a Bulls past were high. Hoiberg was the antithesis of Tom Thibodeau at best tolerated by the management. Hoiberg was to usher in a new era in Chicago, away from defensive basketball under Thibs and towards the modern pace and space that has shaped the league since the Warriors’ first title in 2015.

“We have had some success with Thibs, but when we look to the future, we believe we need a change as an organization so that the franchise can continue to grow and improve,” said GM Gar Forman at the launch of Hoiberg in 2015.

To make it clear: The Bulls reached the second playoff round last year under Thibs and failed after six matches against the Cleveland Cavaliers for LeBron James. Under Hoiberg, the Bulls won two playoff games in three seasons, albeit with some teams that were significantly weaker.

Thibodeau was nevertheless a pawn victim who had lost the power struggle within the organization. Hoiberg is now the weakest link in the chain, so to speak. Chicago started the season with playoff ambitions, which sounded a little out of touch with reality, and again finds itself in the basement of the Eastern Conference with a score of 5-19.

Coach Hoiberg can certainly be reproached for many things, including the fact that this team has no clear direction or identity, but the misery of this season can only be blamed on him to a limited extent. Lauri Markkanen made his season debut at the weekend, Starting Point Guard Kris Dunn will be missing for weeks, the same goes for Bobby Portis. The fact that Hoiberg is being fired right now is simply inconsistent and once again says a lot about the front office in Windy City.

Did Hoiberg have a fair chance at all this season (and the years before)? If you look at the composition of the squad, this is certainly doubtful. This already begins in 2016, when the Bulls did not overpay mediocre centres like 50 percent of the league, but brought overpriced veterans like Dwyane Wade or Rajon Rondo into the team. Players who obviously didn’t fit the coach’s thinking.

This mistake was corrected the following year, both veterans were dismissed, Jimmy Butler traded to Minnesota. Tanking was the motto, what Chicago was doing as obviously as no other team (there was a warning of the league on top) and still only got the seventh pick (Wendell Carter Jr.). But that was enough for the front office to want to play the playoffs again.

Zach LaVine was held as RFA, and the Bulls brought Jabari Parker, a Hometown hero who doesn’t fit into the concept of Hoiberg (like LaVine). Hoiberg wanted the ball to run, not dribble much. Completely surprisingly, both Parker and LaVine could not really put this into practice. An identity was simply not visible to the Bulls, not even from the management side.

But it would be wrong to absolve the coach of any guilt. After more than three years in the NBA, nobody really knows what the coach stands for. Although Hoiberg often talked about his philosophy, it was never recognizable. So he wanted to switch a lot in the defense, but then left a Parker on the field in the crunchtime, which is hardly reasonable defensively, no matter against which opponent, big or small. In addition there were deficiencies in the public presentation and probably also in the handling of one’s own players.

More than two years ago, many doubted Hoiberg’s suitability as an NBA coach, but Forman and John Paxson held on to him, even though the duo didn’t really back their coach up. “Fred will have to work on himself, it’s like working with players. They’ll get better over time and Fred will also find out what kind of NBA coach he wants to be,” Paxson explained on the exit PK after the elimination of Boston Celtics in 2016.

But what will change in Chicago with the dismissal? Jim Boylen, previously assistant under Hoiberg, will hold the reins at least until the end of the season and gets the chance to recommend himself. At least he is a somewhat fresh face, which could also incorporate some new ideas into this dusty franchise.

But much more important is to analyze what talent Chicago has to offer. Markkanen played a hopeful rookie season, but was injured in the end. The Finn is probably the most talented player in the squad, and Frischling Carter showed some good first games. Time will tell whether the two will complement each other well in the front court, though.

LaVine will receive 19.5 million dollars each over the next four years, so it must be seen as an essential part of Bulls’ future. 25.0 points per game sounds promising of course, but with the highflyer the Bulls are penultimate in the offensive rating and his excellent odds at the start of the season have already dropped quite a bit. So LaVine doesn’t really make the offense any better yet, even if he plays nice numbers himself.

The still injured Dunn, on the other hand, could provide structure, even though he has not yet been able to prove that he can be a real starter on the One, even though he will soon be 25 years old.

So is this core sufficient to regain Contender status in the East in the future? Of course there will be changes in the squad, the Bulls will also have a lot of flexibility in the summer, but this can be said of half the league. When did a really courted Free Agent decide to go to Chicago in the past? 34-year-old Pau Gasol 2014?

Slowly but surely Forman and Paxson also have to deliver results, because there were no successes to show. Hoiberg was the declared wish solution to Thibodeau and failed crashing for various reasons. He may not have been a good coach, but the duo didn’t help the trainer with the squad composition either.

At the moment the Bulls are still very far away to become an established force in the NBA again, Hoiberg back, Hoiberg ago. If there is no improvement under Boylen, sooner or later the duo at the top will also have to seriously question themselves.