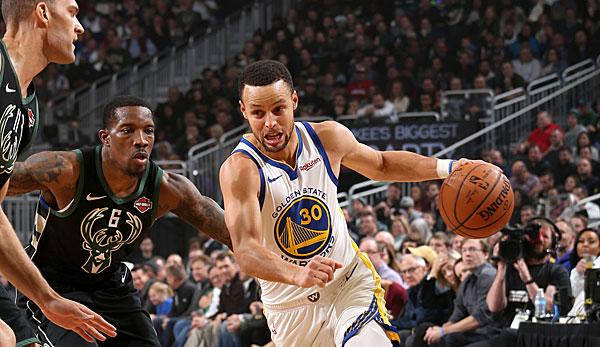 Revenge successful! After the blowout one month ago the Golden State Warriors (18:9) beat back and defeat the Milwaukee Bucks (16-8) in a foreign hall with 105:95 (BOXSCORE). The defense of the dubs is outstanding, on the other hand the Splash Brothers take over again.

About a month ago, the Bucks swept the reigning champion out of the hall with 134:111, this ignominy obviously wanted to make up for Golden State. The Warriors started the game extremely hot without Draymond Green (Zeh), who was still injured, and GSW had 18 points after about half of the first quarter – and Kevin Durant hadn’t taken a single throw yet.

On the other side, however, the offensive did not come together too much at first. Only in the course of the first run Milwaukee came better into the game, which was also due to the 6 ball losses of the guests. Despite an early 10-point deficit, the Bucks quickly fought their way back within striking distance.

It remained relatively balanced until the half-time break, but the Warriors kept the upper hand throughout. In the end the fans were presented with a similar picture as in the first section. Again the Warriors made life difficult for themselves with numerous turnovers, but the Bucks hit slowly but surely a bit better from the distance – with 57:51 for GSW it went into the break.

Even after the side change, both teams fought an intense duel, without one team being able to set off decisively. At first Milwaukee equalized with an 11:2 run, but a little later the Dubs responded with their own 8:0 run. Again, the hosts were able to compensate, but thanks to some three of Stephen Curry, the guests took an 83:76 lead into the final quarter.

And they shouldn’t give it back. Golden State did a much better job in ball handling, in the fourth quarter the guests only made 2 ball losses. In the offense the Spalding ran now in usual Warriors manner, the Bucks had against it with the own attack play further large problems.

Especially from downtown nothing just wanted to fall, even if Khris Middleton (1/7 threes) or Malcolm Brogdon (1/6) tried it continuously in the final section. Golden State had little problem defending their two-digit lead to the end. The Dubs ended their road trip with three wins in a row.

However, Kevin Durant caught a pitch-black evening in the process. The 30-year-old didn’t find his way into the game at all from the start, and it was only for the fifth time in his career that he was left without a successful field goal in the first half. Durant finally only managed 11 points with 3 out of 14 coming out of the field. At least he grabbed 8 rebounds and distributed 6 assists – but he also did 7 turnovers.

After all, he did a very good job in defense. KD kept Giannis Antetokounmpo as far as possible in check, so that the Greek could develop only rarely completely. Also the rest of the Defense knew how to convince.

And on the other side of the court, the Warriors still had Curry (20 and 8 assists) and Klay Thompson, who together with his Splash Brother was not only top scorer with 20 points, but also had 6 assists, 5 rebounds, 4 steals and 2 blocks. Andre Iguodala contributed 15 points to the victory.

In the Bucks the Greek Freak was the best thrower (22 points, 15 rebounds, 5 assists). Brogdon scored 15 points, Brook Lopez and Eric Bledsoe 14 points each. The weak odds of 39.6 percent from the field and 18.4 percent from a distance, however, ultimately prevented the second win against the Dubs.

Klay Thompson. The Shooting Guard delivered a very strong performance on both sides of the court. The Splash Brother was offensively convincing with 20 points and 4 downed threes (on 9 attempts), while on the other side he made life difficult for the opposing guards. So Thompson had an additional 4 steals and 2 blocks.

Khris Middleton. The 27-year-old’s performance is symbolic of the Bucks’ shooting problems. The actual Three-and-D specialist only hit 1 of his 7 attempts from a distance (10 points) – the basket seemed to lead him as well as many of his teammates this evening like sealed.