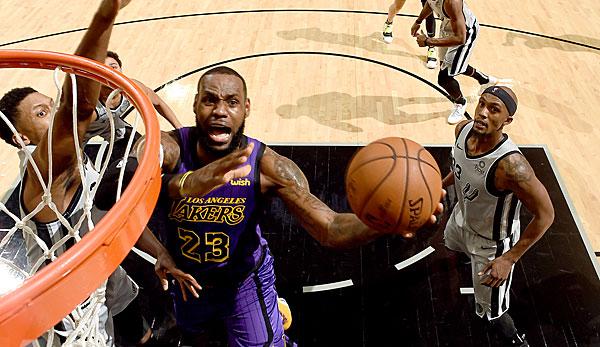 The Los Angeles Lakers look like the sure winner for a long time, but in the final quarter the San Antonio Spurs turn up the heat again – especially thanks to the bear-strong Jakob Pöltl. Despite being 15 points behind, the Spurs finally won the race. Meanwhile, Isaac Bonga celebrates his NBA debut.

It actually looked so good for LeBron James and the Lakers, all pointing to the fifth consecutive victory for the team from the City of Angels. The guests got an almost perfect start, LeBron started the game with a fade-away jumper and shortly afterwards L.A. was already in front with 9:2.

Shortly before the end of the first half, the Lakers then scored three consecutive three points to escape with 15 points. LeBron, who was mistakenly listed as a rookie on the game sheet, already had 24 points, 7 rebounds and 8 assists on his account at the time. Rookie or no rookie, LeBron and the Lakers were on their way to inflicting another heavy defeat on the Spurs.

But San Antonio came back. And even after the Lakers had again lost 10 points at the end of the third quarter, the home side did not give in – quite the opposite! The Spurs Bank in particular put its foot down, led by Jakob Pöltl and Patty Mills.

Both scored 14 points, the Austrian scored 10 of them in the final section alone, including a crashing putback dark. Altogether the track reservists made their opponents with 52:26, in the final section they led their team to an 18:6 run, with which San Antonio took the lead and the control.

Neither was to be taken out of hand. In the decisive phase, DeMar DeRozan also had a strong say alongside the strong bank. The shooting guard scored 11 of his 36 points in the fourth quarter, plus 8 rebounds and 9 assists. In addition to his 14 points (5/6 FG), Pöltl also played 8 rebounds and 2 assists as well as 3 blocks in 24 minutes (+17).

In the end, the Lakers had nothing more to oppose. LeBron finished the game with 35 points, 11 assists and 8 rebounds, but neither the King nor the equally strong Kyle Kuzma (27 and 8) could do anything against the momentum of the Spurs in the last round.

So the game was decided just minutes before the siren and Lakers coach Luke Walton sent his reservists on the floor. Among them was Isaac Bonga, who was pulled up from the G-League just a few days ago and was now celebrating his debut in the NBA. In a little more than a minute of playing time, however, the German remained without any noteworthy actions and could not even enter into the boxing score. Meanwhile, Moritz Wagner was not deployed.