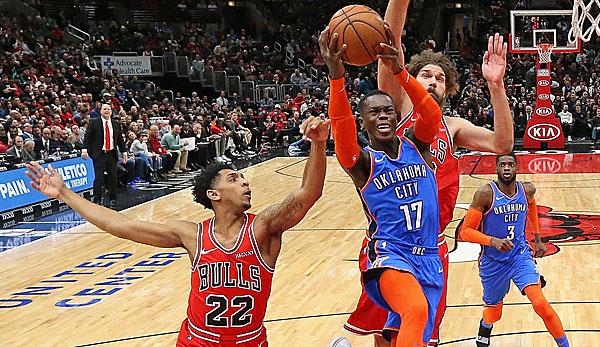 The Oklahoma City Thunder lose a thriller against the Chicago Bulls – despite a triple double by Russell Westbrook and a good performance by Dennis Schröder. Meanwhile, the Raptors also suffer a surprising defeat, while Jimmy Butler leads the Sixers to a comeback victory. Grizzlies, Pacers and Kings also win.

Tony Parker is far from ready to retire. The 36-year-old Frenchman proved this again impressively against the nuggets, especially when he fooled the defense of the guests with a beautiful spin move. “I’ve seen this move so many times before,” said compatriot Nicolas Batum. “I almost had to laugh a little when he did it.”

It wasn’t Parker’s only strong action that ended up with 19 points (6/14 FG), but in the second section alone the old champion scored 13 points and 3 dimes. It was at this stage that the Hornets took a break for the first time, with the home side leading 64-53 by half-time.

And Parker was also on the spot during the Crunchtime. For the nuggets fought their way back again. Jamal Murray became the top scorer of his team with 20 points, while Paul Millsap, Malik Beasley and Nikola Jokic each scored 16 points. The Joker also had 11 rebounds and 6 assists.

But in the end it was a Monte Morris trio who brought Denver up to 3 points 1-13 minutes from time. But then Parker struck again. The Point Guard sunk an enormously important step-back-jumper to 108:103, Michael Kidd-Gilchrist didn’t give the other side a chance with a spectacular block Juan Hernangomez and Kemba Walker (21 points, 8 assists) brought the first victory after three defeats in a row from the free-throw line into dry cloths.

For the nuggets there was another bad news besides the defeat: Millsap injured his foot in the third quarter and had to leave the game. Later it turned out that he apparently broke his toe.

After their last defeat against the Raptors, the Sixers are apparently back on track. In Detroit, we managed the fifth victory of the past six games, for Head Coach Brett Brown there was even a special reason to celebrate: “This was our best victory this year, considering the circumstances”.

Explanation. Brown renounced one of his best players that night. Joel Embiid was prescribed a breather and was only allowed to watch from the bench as his teammates clearly fell behind in the third quarter.

Led by Blake Griffin (31 points, 12 rebounds, 6 assists) and Andre Drummond, who was certainly the most happy about the lack of Embiid and played 21 points and 10 boards, the home team even gained a 15-point lead. The decision?

Not by a long shot! Because Philadelphia still had a certain Jimmy Butler in its ranks. The 29-year-old scored 26 of his 38 points in the second half and led his team back into the game. But in the end it was the strong defense that helped the Sixers to their next comeback victory.

The Pistons only hit 9 of their 26 attempts out of the field in the final section, especially the ring protected Philly much better now. “Defense will always win you games,” said Butler, who had a little quarrel with Griffin in the final stages of the game. “He just tried to be hard,” Butler explained the scene afterwards. “He used his elbows and all that stuff. That’s what he does.”

The Magic seem to just lie Indiana. In the past eight games, the Pacers have been the winners, and Orlando have suffered 15 defeats in the last 16 encounters between the two teams. They kept up quite well that evening until the middle of the third quarter, but then the guests took control.

Orlando could not recover from that. Indiana’s defense posed enormous problems for the landlords, especially at the perimeter, with only 8 litters (24.2 percent) of the 33 attempts from downtown ending up in the basket. Nikola Vucevic (20 points and 10 rebounds) as well as Aaron Gordon (20 and 14) played strong as usual, but otherwise only Terrence Ross (11) had a two-digit score.

On the other hand, Bojan Bogdanovic was the top scorer with 26 points (21 of them in halftime one). Corey Joseph contributed 15 points from the bench, Thaddeus Young (14) and Kyle O’Quinn (12 and 10 boards) also convinced in the balanced Pacers team structure. Darren Collison only scored 2 points (1/5 FG) but distributed 8 assists.