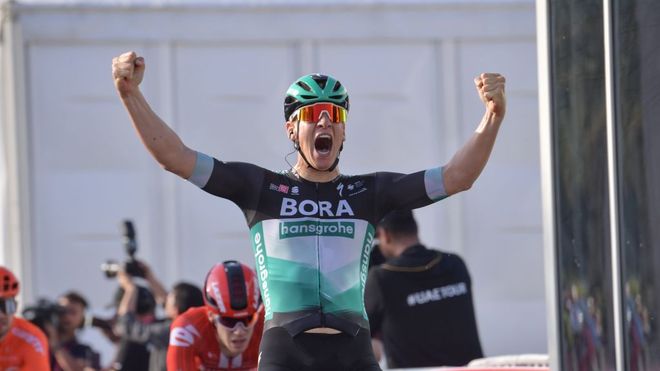 Pascal Ackermann defeats the entire sprinter competition at the start of the UAE Tour and wins in Dubai. Chris Froome makes his comeback after a break of several months.

Professional cyclist Pascal Ackermann has convincingly won the first big sprinter duel of the season against the assembled elite at the start of the UAE Tour. The man from the Palatinate region of Germany from the German team Bora-hansgrohe won the first stage in Dubai after 148 kilometres, clearly ahead of the Australian Caleb Ewan (Lotto-Soudal). Other top sprinters such as Dutchman Dylan Groenewegen or Irishman Sam Bennett only saw the 26-year-old’s rear wheel.

“I noticed that my form is good,” said Ackermann, who celebrated his second victory of the season in the United Arab Emirates and also took the overall lead: “The final was very hectic, but I found my own way and surprised the others with my early start. Max Walscheid (NTT) also placed well in eighth place.

The four-time Tour de France winner Chris Froome (Ineos) crossed the finish line in his first race since the serious accident in June 2019 in the peloton. The Briton still has low expectations after the eight-month compulsory break. “I’m still a long way from where I was before the crash,” the 34-year-old, who is aiming for his fifth Tour victory this summer, had said before the race.

The UAE Tour will continue on Monday with a 168-kilometre section to Hatta Dam. The tour, which Ravensburg climbing specialist Emanuel Buchmann (Bora-hansgrohe) is also using to further improve his form, ends on Saturday in Abu Dhabi.