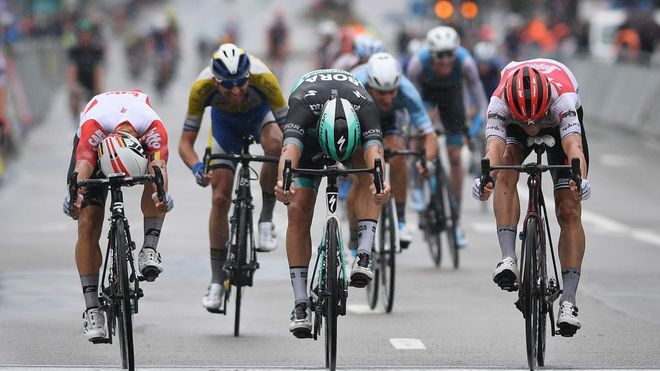 Pascal Ackermann loses the lead in the overall standings on the second stage of the UAE Tour. Rick Zabel, the best German, crosses the finish line in fifth place.

Sprinter Pascal Ackermann had to give up his overall lead on the second stage of the UAE Tour.

The 26-year-old from Team Bora-hansgrohe lost touch with the leading group on the 168 km section from Hatta to Hatta Dam in the final and was 7:34 minutes behind day winner Caleb Ewan (Lotto-Soudal). The Australian also took the overall lead.

Difficult day for Ackermann
“Today was a really difficult day. I had a few problems with the heat and didn’t feel really good – nevertheless, I tried to ride for a result,” said Ackermann: “Unfortunately, the pace on the long climb ten kilometres before the finish was too high, so I couldn’t keep up with the front runners anymore.

Best German became Rick Zabel (Israel Start-Up Nation) in fifth place. Ackermann had prevailed against the assembled sprinting elite in the mass spurt on Sunday and celebrated his second victory of the season.

Four-time Tour de France winner Chris Froome (Ineos), who is celebrating his comeback in the Emirates after his serious accident in June 2019, finished 3:46 minutes behind Ewan outside the top 100. The UAE Tour ends on Saturday after seven stages.