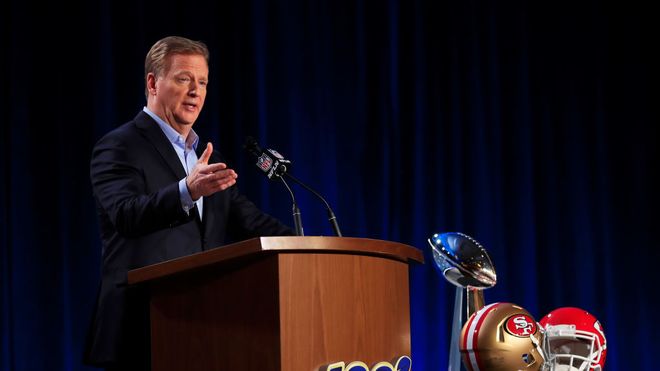 NFL commissioner Roger Goodell is going ahead with good abandonment example because of Corona. Other league employees are also to volunteer to help cut costs.

NFL commissioner Roger Goodell apparently voluntarily waived a monthly salary in times of the corona crisis. This was reported by several US media citing a memo by Goodell.

With this, the head of the US professional football league wants to do his part to reduce the costs of the NFL.

The 61-year-old had been awarded a new five-year contract in 2017 with an annual salary of 40 million dollars (around 36.7 million euros).

In addition, he reportedly announced that starting May 22, NFL employees earning more than $100,000 a year will have their salaries cut by between five and 15 percent through short-time work.

Employees who earn less will not be affected by such measures. Regardless of the current situation, the league plans to carry out the season, which starts in September, according to plan.

“We hope that the business conditions will improve again and allow us to return to the original salaries. Although we do not know when that will be,” Goodell wrote.

The NFL is the top-selling professional sports league in the USA. In 2018, it will have a turnover of 16 billion dollars.

No punishment for Brady
NFL ticker: Jets get Bell replacement