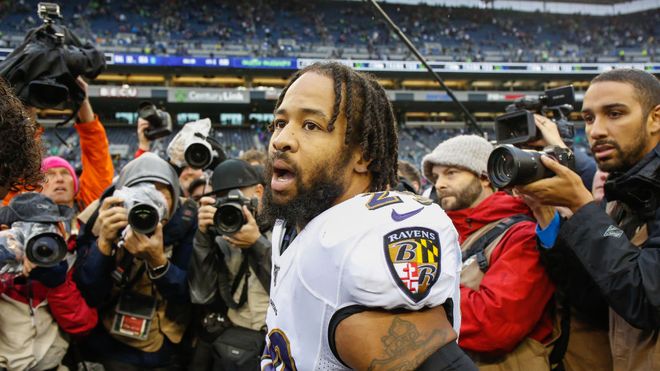 Earl Thomas is caught by his wife in bed with his brother and another woman. She then threatens him with a loaded gun.

Earl Thomas has caused a scandal on his 31st birthday.

The Baltimore Ravens’ safety had been threatened by his own wife with a loaded pistol on April 13th, as reported only on Thursday. This was revealed in a police report.

As the celebrity portal TMZ reports, there had been an argument the night before between Earl and his wife Nina Thomas about his drinking. The seven-time pro bowler was then picked up by his brother Seth from the couple’s apartment.

Nina Thomas then wanted to know his whereabouts and logged on to the messaging app Snapchat with his account. According to her own statement she found a video of Earl with another woman. With the help of the app’s tracker, she found out that her husband was in a nearby Airbnb apartment.

Nina threatens Earl Thomas with a gun
Nina Thomas then called two more women for help, with whom she drove to the apartment to confront her husband – she also packed her husband’s pistol to “scare” him. In the apartment she is said to have met Earl, his brother Seth and other women – all of them were lying naked in a bed.

Thereupon the 30-year-old drew the pistol and held it in front of her husband’s face. Although Nina claimed that she had taken the magazine out of the gun to make sure that it could not go off, according to the police there was still a bullet in the barrel.

The Austin Police Department also stated that another woman filmed the incident. It was seen as the gun was “less than a foot (about 30 cm, editor’s note) away from her head and it was clearly visible that Nina’s finger on the trigger and the safety was loose.

Police observe bizarre spectacle
Fortunately, the star defender managed to steal the gun from his wife’s arm, who then punched him in the face with her fists. Nina is also said to have threatened the alleged lover with the gun, another companion is said to have swung aggressively with a knife.

When the police arrived at the apartment at 3.41 a.m., they noticed a bizarre spectacle. “We watched as a dark-skinned woman with an orange sweater and a knife in her hand – later identified as Nina Thomas – chased a man without outer clothing around a car with a pistol – later identified as Earl Thomas.”

NFL ticker: Jets get Bell replacement
The ingenious plan of the NFL