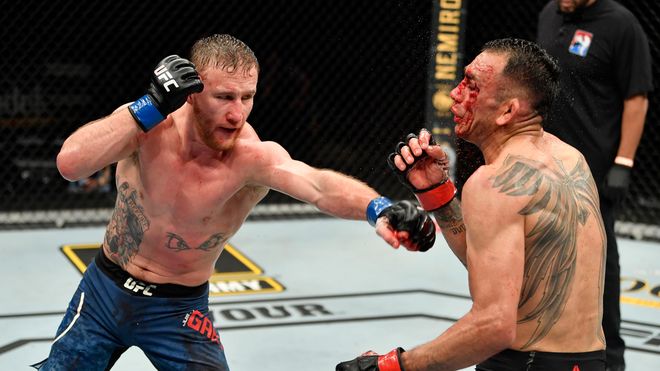 Justin Gaethje crowns himself interim champion in the UFC after a tough fight against Tony Ferguson. Many football stars watch enthusiastically.

While almost the entire sports world has come to a standstill one week before the Bundesliga restart due to the corona crisis, the UFC has seen merciless fighting in the night to Sunday.

Justin Gaethje secured the interim lightweight title after a veritable battle of wear and tear.

The dreaded USA champion won the fifth round after a brutal Saturday UFC 249 fight against Tony Ferguson after a technical knockout. The 31-year-old ended the fight after almost 25 minutes with a jab from a strong left. His opponent started to stumble and after another goal the referee stopped the duel.

Before that, however, even Ferguson, who was five years older, had given out a lot. But in the end he had to pay tribute to his opponent’s notorious punches – he had won his last 12 fights and has not been defeated since 2013. Fighting took place in front of empty stands in Jacksonville, Florida.

Countless fans followed the action – whether due to a lack of alternatives or because of existing interest, it remains to be seen – but on the screens. Among them were football stars Tom Brady, who now plays for the Tampa Bay Buccaneers, and Super Bowl champion Patrick Mahomes of the Kansas City Chiefs.

“I love the UFC. Unbelievable determination and discipline from all the athletes,” tweeted Brady, who, for example, had been following UFC 246 on location.

TV expert Stephen A. Smith wrote: “Live sports. Live entertainment. Goddamn, I missed this.” I think he got a lot of people talking.

Gaethje hot for McGregor conqueror
Gaethje had won his last three fights in the first round.

When he was handed the belt after the fight, he threw it carelessly to the ground. He wanted to have the “real” one, the interim champion explained. However, he will have to get it from Khabib Nurmagomedov, who is undefeated at the top of the lightweight after 28 fights – among others, the Russian had already put former title holder Conor McGregor in his place.

“Khabib is the best fighter in the world. He is 28-0 and there is no other challenge I want at the moment,” Gaethje said.