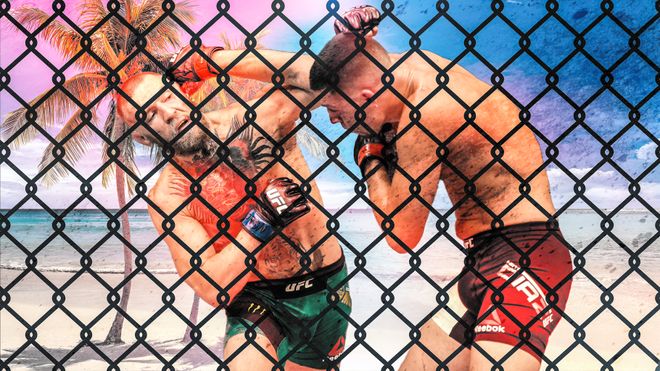 UFC boss Dana White wants to hold his cage fight on a private island starting in June. The plans around the “Fight Island” become more and more concrete.

While almost all over the world the sport is at a standstill due to the corona crisis, the UFC is venturing back.

In Florida several fights took place in front of empty ranks – including UFC 249, which caused a sensation. And this, of all things, in a full-contact sport where sweat, saliva and blood are almost unavoidable.

However, UFC boss Dana White seems to have a special position that is not enough. The million-dollar business in the USA is to be kept going – and the 50-year-old has come up with an unusual plan for this.

UFC boss White plans fights on island
As White announced, MMA fights will take place on a “Fight Island”, i.e. a private island. In a cage on the beach the MMA fights are planned and training facilities as well as hotels for the fighters will be installed.

“The whole island, the whole infrastructure will be built so that the UFC can have fights there,” White explained. “Fight Island is scheduled to be operational by June. So I should be able to start hosting international events in June.”

Originally, Fight Island was considered a one-off event, but White seems to have a longer-term event in mind.

White acknowledged one difficulty with this: the return of the fighters to their homes. “That will be a problem. If you leave the island, you have to be quarantined,” he made clear.

This is something to deal with, White continues. “Me too. I’ll probably have to go into quarantine for two weeks before I come home. But that’ll be the new world we live in.”

McGregor v. Diaz on Fight Island?
If White’s plans were indeed to come to fruition, spectacular island fights could await fans. Speculation is that a fight between archrivals Conor McGregor and Nate Diaz…

The two British fighters Nathaniel Wood and Joanne Calderwood have also already expressed their interest in competing on the island.