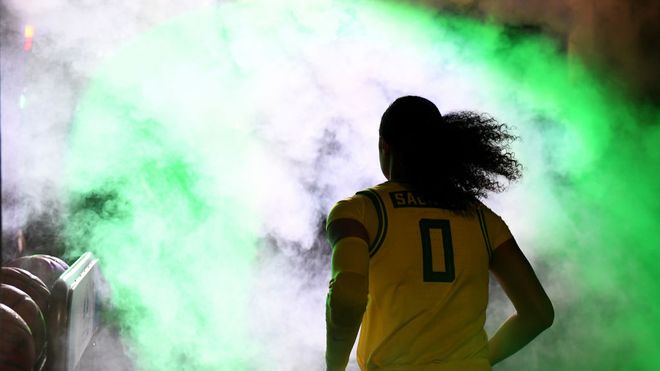 Satou Sabally will probably make her WNBA debut for Dallas at the end of July. The league plans to hold the season in Florida. Two other Germans will stay in Europe.

The US professional league presented its plans for the coming season on Monday. At the end of July, the regular season is to begin with 22 playing days, the players’ union has already agreed.

WNBA also plays in Florida
Originally it was supposed to start on 15 May, but due to the corona pandemic the launch was postponed indefinitely. The league and the union also agreed that the players would receive their full salary, although 36 main round matches per team were originally planned.

The contract with the IMG Academy in Bradenton, Florida as the venue only needs to be finalised, according to the WNBA. The first two playoff rounds will each be a knockout match, the semi-final and final will be played in best-of-five mode.

German duo remains in Europe for the time being
The 21-year-old Sabally had been selected second by the Dallas Wings at the draft in April. Luisa Geiselsöder and Leonie Fiebich, who were also drawn at the talent awards, decided, unlike Sabally, not to compete in the WNBA until 2021.

Geiselsöder will initially play for Landerneau Bretagne Basket in France, while Fiebich will also play for record champions TSV Wasserburg in the Bundesliga next season.