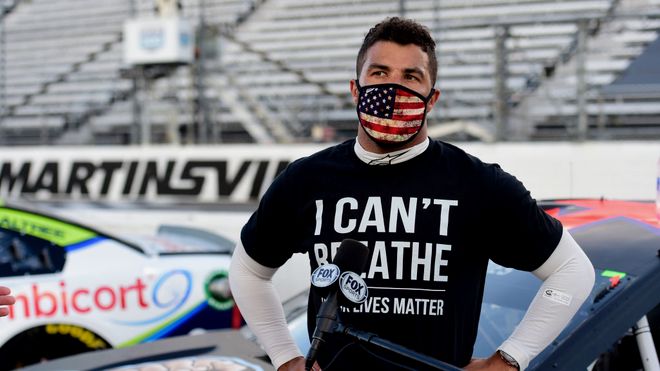 In the incident involving NASCAR driver Bubba Wallace, the FBI is not assuming that the incident was racially motivated. The drivers have taken a stand against racism.

The incident around the black NASCAR driver Bubba Wallace is not a racist crime according to the FBI.

According to the US investigators on Tuesday, the rope that was found had been in the 26-year-old’s box at the Talladega Superspeedway in Lincoln/Alabama for months.

Therefore no charges will be brought in this case.

The FBI had “completed its investigation and determined that Bubba Wallace was not the target of a hate crime,” the racing series NASCAR wrote in a statement. The towing rope for a garage door had been at the site since last fall, at which time the garages had not yet been assigned.

“We appreciate the quick and thorough investigation by the FBI and are grateful to hear that this was not an intentional racist act against Bubba,” NASCAR continued.

NASCAR sets an example against racism
Wallace told CNN on Tuesday night that the rope he saw in a photo was definitely twisted into a noose – a picture reminiscent of lynching black Americans. “The picture of the rope hanging in my garage wasn’t a garage doorknit,” the 26-year-old said. “It wasn’t directed at me, but somebody tied a noose.”

A rope had been found in the pit of the only black driver in the racing series before the race.

NASCAR initially assumed that the crime was racially motivated. The entire paddock and crews had lined up behind the Wallace car on Monday before the race to make a stand against racism.

Wallace had recently successfully pushed for the Confederate flag, popular with NASCAR fans but a symbol of slavery and racism, to be banned from racing. NASCAR is particularly popular among the white American middle class.

Sabally: WNBA debut end of July
No fans in Philadelphia