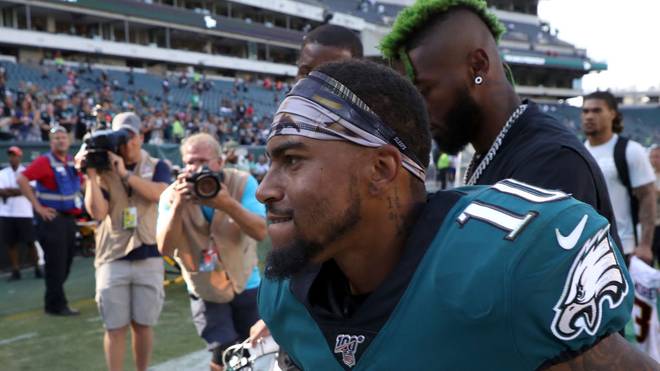 Eagles Wide Receiver DeSean Jackson causes a stir with anti-Semitic posts and apologizes. Now they discuss how the league and his team should react.

The next political incident in the NFL! After the fuss about Drew Brees and the newly ignited name dispute about the Washington Redskins, Wide Receiver DeSean Jackson caused a scandal with posted Hitler quotes. He also expressed admiration for Louis Farrakhan, the questionable leader of the African-American religious group “Nation of Islam”.

After the anti-Semitic messages the player from the Philadelphia Eagles apologized. His team is currently investigating the consequences for the 33-year-old.

He also shared two contributions by Louis Farrakhan, who is considered anti-Semitic by the anti-discrimination associations “Southern Poverty Law” and the “Anti-Defamation League”.

What makes the matter even more explosive: Both team owner Jeffrey Lurie and managing director Howie Roseman are of Jewish faith. “We have spoken to DeSean Jackson about his social media posts,” the Eagles said in the statement. “Regardless of his intentions, the messages he shared were insulting, harmful and absolutely terrible. They have no place in our society and are not tolerated or supported in any way by the organization.”

What Kaepernick and Disney are planning
Trump throws names into wrangling