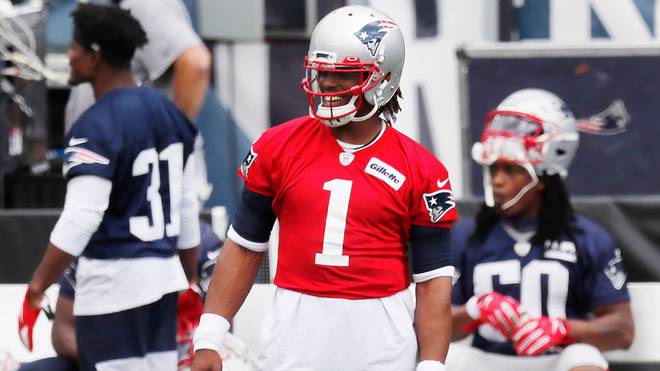 After the end of the era of Tom Brady there is much uncertainty among the New England Patriots. There are also doubts about Cam Newton as the new bearer of hope.

Best mood despite the great upheaval among the New England Patriots: A few days before the start of the new NFL season with the game against the Miami Dolphins, both head coach Bill Belichick and the players everywhere are keen to show the strong cohesion and fun in interviews and pictures.

A lot has changed with the former series champion – and so some question marks accompany the team.

After the era of superstar Tom Brady, who moved from Foxborough to the Tampa Bay Buccaneers after 19 years, much is new. One man in particular – the Brady heir – is in the spotlight: Cam Newton.

Last NFL chance for Cam Newton?
After eight seasons with the Carolina Panthers and his recent poor performances, this is probably his last chance in the league. At the age of 31, he is slowly approaching the advanced age of athletics, and his body in particular is showing signs of wear and tear after nine years in the league.

So there are many doubts about the bearer of hope – and Newton himself recently confessed that he had reservations before signing with the Patriots.

In the meantime, however, he now sees his involvement with the Patriots as a “connection of heaven”, after all, he is “in a place where everything points in the same direction and everything is geared towards winning.

Conversely, the new man has also made an impression in recent weeks. “Nobody works harder than him,” praised Coach Belichick. The German fullback Jakob Johnson is also impressed. “He brings energy every day and is very happy to be part of this team.”

Financially, the Patriots do not take any risks. Newton has a strongly performance-based contract for one year, guaranteed sum is only 550,000 dollars. The base salary is $1,050,000. So Newton joins the list of other cheap deals with the Patriots. For comparison: Patrick Mahomes can earn around 530 million euros in the next twelve years with the Kansas City Chief in this position.

Belichick makes Newton the captain
As of this week, Newton is now officially the number one in his playmaker position and has been named one of the team captains on the offensive after just under a month.