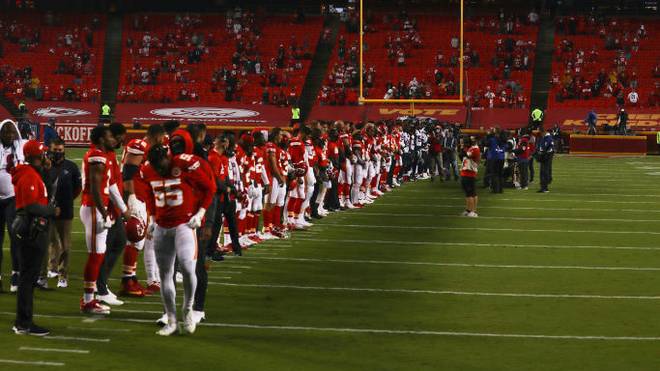 The Kansas City Chiefs and Houston Texans join forces at the NFL launch to protest against racism and police violence in the United States. But some fans dampen the mood.

Even though a few incorrigibles fell out of their roles – all in all, it was an impressive statement for more respect and tolerance:

At the start of the new season, the NFL football professionals drew attention to racism and police violence in a solidarity campaign.

Before the opening match between defending champions Kansas City Chiefs and Houston Texans, which the champions won 34-20 after a strong performance, both teams had met in the middle of the field, hooked each other under and held a joint minute of silence.

What’s more, the scoreboard at Kansas City’s Arrowhead Stadium also featured seven political statements, including “We must end racism” and “We must end police violence.

Booing calls of some incorrigible fans
However, some of the 16,000 or so spectators in the stadium, which was only 22 percent full due to the Corona pandemic, booed – and thus clouded the otherwise impressive and peaceful atmosphere.

The Texans players had stayed in the dressing room during the US national anthem. Regrettably, when they entered the stadium, booing could also be heard.

The footballers of the Chiefs around superstar quarterback Patrick Mahomes, however, stood during the anthem – with one exception. Defensive player Alex Okafor knelt and raised a fist.