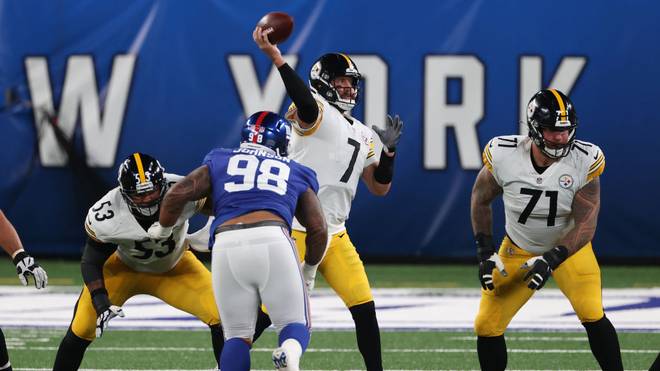 The long period of suffering is over: Ben Roethlisberger celebrates a strong comeback when the Pittsburgh Steelers win against the New York Giants in the Monday Night Game. JuJu Smith-Schuster becomes the match winner.

Big Ben is back for good: Ben Roethlisberger has successfully made his comeback with the Pittsburgh Steelers and with his franchise he won 26:16 against the New York Giants in the first Monday Night Game of the still young NFL season.

The star quarterback, who had been on a break for more than a year due to an elbow injury, proved right away that he still can do it, throwing three touchdown passes, including a 10-yard touchdown pass to JuJu Smith-Schuster. As a reminder: It was Roethlisberger’s first touchdown pass since December 30, 2018 at 16:13 over the Cincinnati Bengals, at that time also on Smith-Schuster.

With two touchdowns and a fumble, the receiver became the real match winner for the Steelers, who were especially strong in defense.

Roethlisberger, who had undergone surgery after his second match of the season last year, returned with 21 of 32 passes for 229 yards of space and declared afterwards relieved: “Great, that feels good.

Smith-Schuster shines with Steelers
The Giants opened the game with a meager field goal, but did not even make it into the end zone during their first wave of attacks. Their first series after the break also went unprofitable after an interception – also because returner Diontae Johnson caught a weak day.

After the Steelers’ quick equalizer, New York countered with a 41-yard touchdown pass from QB Daniel Jones to Darius Slayton.

But then T.J. Watt’s next interception played into the hands of the Steelers for their first touchdown. A 13-yard touchdown catch by James Washington in turn sent Pittsburgh into the break with a 16:10 score.