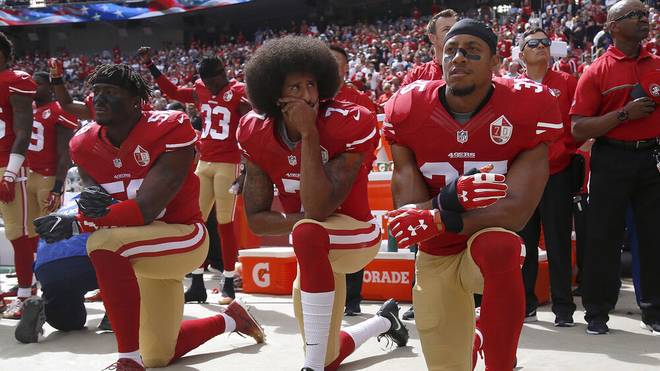 The NFL causes a stir with an anti-racism video. The still unemployed Colin Kaepernick is used in it, a former teammate rages.

For years there have been disagreements between the NFL and former professionals Colin Kaepernick and Eric Reid. Now a video is again causing great excitement.

To mark the start of the new NFL season, the league released a video at the opening game between the Kansas City Chiefs and the Houston Texans on Thursday to illustrate the efforts in the fight against racism.

The video features singer Alicia Keys performing the song “Lift Every Voice and Sing,” known as the “black national anthem. The song is accompanied by pictures of NFL professionals who protested for the “Black Lives Matter” movement this summer and wore appropriate clothing.

It also shows the former quarterback Colin Kaepernick kneeling during the national anthem – at that time still part of the San Francisco 49ers. For Eric Reid, who is a private friend of Kaep’s, this is an absolute nonsense.

“What the NFL does is half-hearted at best,” he tweeted about the video, adding that NFL commissioner Roger Goodell was comfortable saying he was “wrong. The mere admission could not be reconciled with his misconduct.

According to the video, Goodell used Kaepernick to “legitimize the NFL’s disingenuous PR while maintaining the systematic repression against which the video he is using is fighting by continuing to rob Colin of his career,” the former 49ers professional continued. “This is diabolical.”

Kaepernick himself also expressed his support for his former teammate. “While the NFL is doing propaganda about how it cares about the lives of blacks, it still actively excludes Eric Reid because he is committed to the black community,” the former athlete twittered.

In 2016, the now 32-year-old had started kneeling to the national anthem in protest against racism and police violence in the United States. He was subsequently dismissed by the San Francisco 49ers. In 2017 Kaep accused the owners of the individual NFL teams of having made arrangements to prevent him from signing a contract.

Kaepernick and Reid without job

Since then Kaepernick, who was one of the best playmakers in the league, has not been given a job as quarterback. Eric Reid, who had also protested to the 49ers, was signed by the Carolina Panthers in 2018 despite his association with Kaepernick, but was dismissed in March this year. Since then he has also been without a job.

The NFL is currently involved in the “Black Lives Matter” initiative. In June, Commissioner Goodell even declared that he would support and encourage teams to sign Kaepernick.

Last weekend several teams protested during the anthem. Many stayed in the booth or lined up arm in arm with the opposing team.