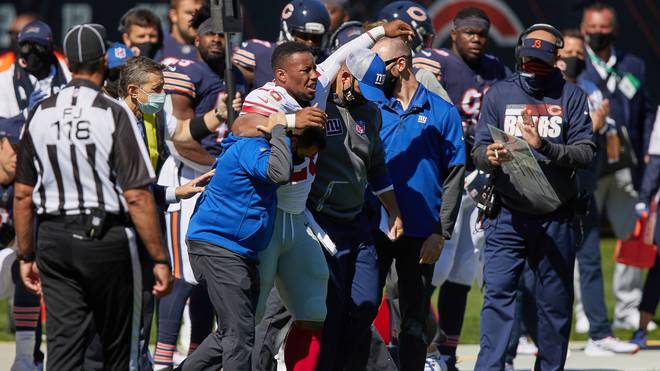 Saquon Barkley apparently tears his cruciate ligament against the Chicago Bears and has to check off the season. The San Francisco 49ers are also badly affected.

For football superstar Saquon Barkley (23), the NFL season may be over after just two games.

The running back of the New York Giants left the field on Sunday at 13:17 against the Chicago Bears with suspected rupture of the anterior cruciate ligament in his knee. Further examinations on Monday should give exact information.

Anyway, the National Football League is struggling with many injuries after the corona-induced loss of the preparatory games (preseason).

The Super Bowl participant San Francisco 49ers, team of the German linebacker Mark Nzeocha, got five times as many on Sunday:

Star defender Nick Bosa (also suspected of a torn cruciate ligament), quarterback Jimmy Garoppolo, defensive tackle Solomon Thomas and the running backs Raheem Mostert and Telvin Coleman had to get into the cabin early in the victory against the New York Jets. The German wide receiver Equanimeous St. Brown from the Green Bay Packers also has a knee injury.