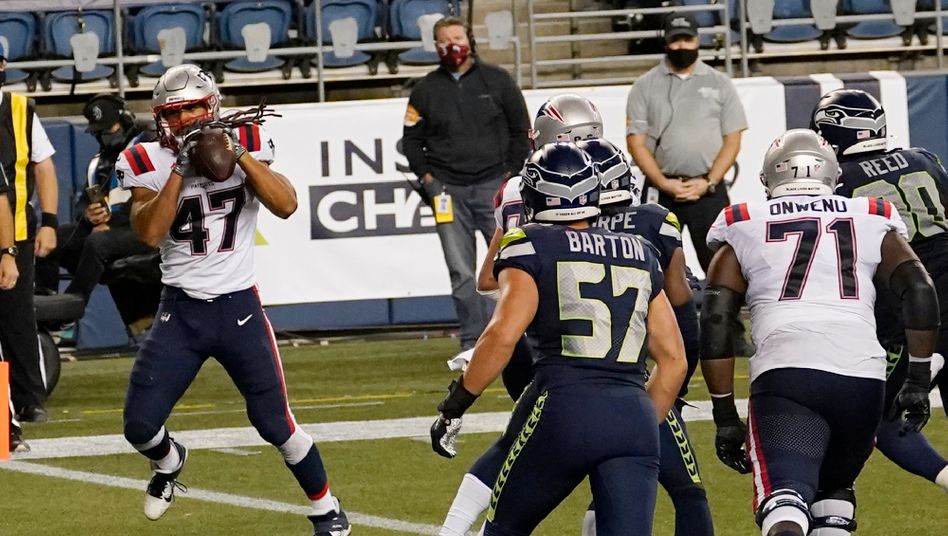 According to Markus Kuhn, Jakob Johnson achieves extraordinary things in the NFL. But that doesn’t change the defeat of the New England Patriots against the Seattle Seahakws.

This is a historic event: As only the second German professional football player, Jakob Johnson scored a touchdown in the NFL.

In the dramatic 30:35 defeat of the New England Patriots in the Sunday Night Game against the Seattle Seahakws, the Stuttgart player caught a 1-yard pass from quarterback Cam Newton in the end zone in the third quarter, scoring six points to make it 23:28.

Just to remind you: Previously, Markus Kuhn alone had scored a touchdown in the NFL from a German perspective – in 2014 in the service of the New York Giants.

“I did not know that. But that’s great. I’m sure I’ll realize that later,” said Johnson. Kuhn, meanwhile, congratulated his successor. “Congratulations!!! Welcome to the club,” the former Defensive Tackle wrote on Twitter.

Johnson is only playing his second season in the strongest football league in the world and was active in this country for the Stuttgart Scorpions in the GFL.

The 25-year-old fullback joined the Patriots through a support program for international players. In his first NFL year, Johnson, who is mainly used as a blocker, had only caught one pass for five yards of space.

Johnson now became the first player to catch a touchdown pass from Cam Newton in the service of the Patriots after he replaced superstar Tom Brady, who had emigrated after 20 years.

For Newton, the most valuable player (MVP) of the 2015/16 season, it was the first touchdown pass in the Patriots’ jersey.

But even that could not change the bankruptcy against Seahakws. The franchise of head coach Bill Belichick allowed 5 touchdowns by the outstanding Seahakws-Quarterback Russell Wilson.

In the course of a 4-yard touchdown by Tyler Lockett (drive over 8:15 minutes / 13 plays) the Patriots only got back on the ball at the end of the opening quarter at 7:7.

New England’s first drive also resulted in a touchdown thanks to Newton, who ran from the 1 ball into the end zone. Shortly thereafter, however, Wilson threw a 54-yard touchdown pass to D.K. Metcalf in his first highlight action, which equalized the score once again and allowed the teams to go into the break with a 14:14 score.

After that the Seahawks continued to advance – Wilson found against the weak Patriots defense among others David Moore for a 38-yard touchdown, followed by Freddie Swain (21-yard TD).

Johnson’s touchdown coup gave New England hope once again, as did Newton with another touchdown that softened Wilson’s crucial 18-yard touchdown pass to Chris Carson earlier in the game.

But in the end, the Patriots simply did not find enough solutions to raise their game – and above all to stop Wilson.