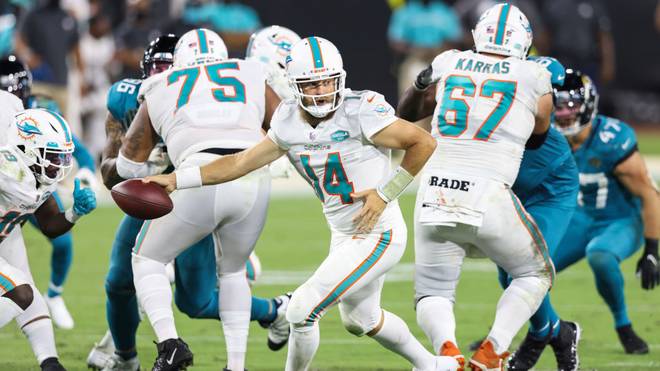 Ryan Fitzpatrick succeeds with the Miami Dolphins in the game against the Jacksonville Jaguars. The quarterback sets a new NFL record.

What a day for quarterback Ryan Fitzpatrick.

At the start of the third NFL game day, the 37-year-old not only celebrated a 31-13 win against the Jacksonville Jaguars, the first Dolphins victory of the season, but also set a new NFL record.

It was not the first time that the playmaker won against the Jags. The Dolphins are already the sixth team with which “Fitzmagic” could win against the Jaguars. Before that, he had already won with the Bengals, Bills, Titans, Texans and the New York Jets. Never before has an NFL quarterback with six different teams won against one and the same opponent.

“Fitz has lost his mind. He is 37 and plays as if he were 23, and you can see the fun he has. After I scored a touchdown, he came screaming off the field and celebrated with me. It’s so much fun to play with him,” praised Tight End Mike Gesicki.

With the clear success for the Dolphins a dry spell also ended. Miami hadn’t had a double-digit win in 39 games, the last of which was the 35:9 win over the Denver Broncos in early December 2017.

The Dolphins had already laid the foundation for victory in the first quarter with two touchdowns. First Preston Williams caught a pass from Fitzpatrick over three yards, then Jordan Howard ran for one yard. And it went on well. A 15-yard pass from Fitzpatrick to Gesicki led to a touchdown, as did a run for a yard from the quarterback himself.

James Robinson was successful twice on the Jaguar side. But his two touchdowns were not enough.

Fitzpatrick also set a new career high for himself personally. His first twelve passports all found a buyer. “That’s why I’m still playing. I enjoy playing, especially when you are successful. Sometimes I feel like the happiest person in the world because I can just go out and play football with my friends,” enthused the playmaker after the game.

After two defeats, the Dolphins were finally able to rejoice in their first victory, while the Jaguars took their second consecutive defeat.