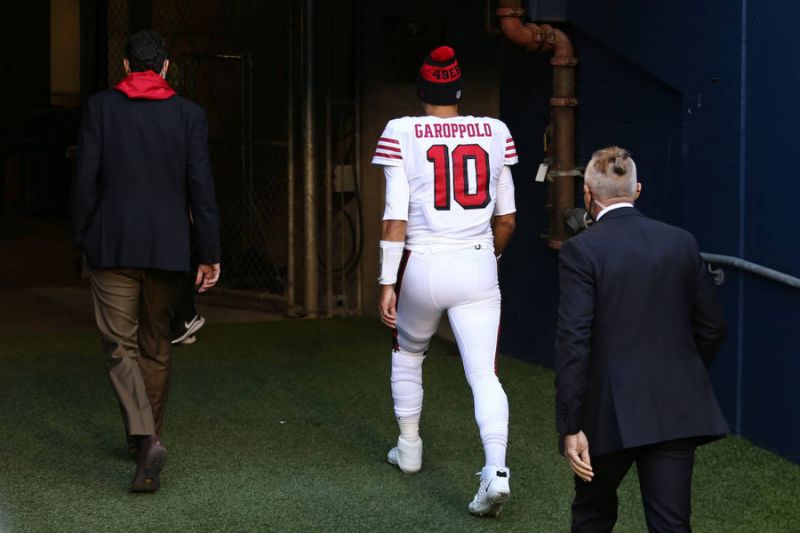 With Super Bowl loser San Francisco the injury plight is getting worse and worse. After Tevin Coleman, Jimmy Garoppolo and George Kittle are also hit.

The injury epidemic in the San Francisco 49ers has no end.

After Running Back Tevin Coleman, the California top team now also has Quarterback Jimmy Garoppolo and Tight End George Kittle. Both were injured in the duel against the Seattle Seahawks, which the 49ers lost 27:37.

The injuries of Kittle and Garoppolo occurred at the beginning of the fourth quarter and were only a few minutes apart. Both players retreated to the locker room for further examination and did not return to the field.

According to ESPN information, Garoppolo will probably be missing at least six weeks. With Kittle it comes obviously still thicker: Contrary to first results the 27-Jährige got itself a break. He will be missing at least eight weeks – this could be the end of his season.

Garoppolo grabbed his ankle at the start of the game, but continued to play it before being taken out of the game with 14 minutes remaining on the clock. He limped into the dressing room afterwards and had to be replaced by Nick Mullens.

Garoppolo and Kittle limp from the field

The 29-year-old already suffered an ankle sprain in week two against the New York Jets and was absent in the following two games. “He had a good week of throwing practice, but ankle sprains continue. I know he injured himself later in the game or injured again, and we’ll wait until tomorrow to see how bad it is,” Shanahan said.

Kittle also limped towards the touchline. “At least on the X-rays nothing was broken, so we’ll have to check the MRIs and so on tomorrow. He wanted to keep playing. We tried, but he just couldn’t. Of course I hope he’s fit for Thursday, but his knee was injured again and he couldn’t return,” Shanahan explained.

After Coleman’s retirement, the Niners had only the newcomer JaMycal Hasty and veteran Jerick McKinnon as running backs. Raheem Mostert and backup Jeff Wilson Jr. were already on the injury list.

NFL! Chiefs get Bell
Bradys Bucs win after catching up