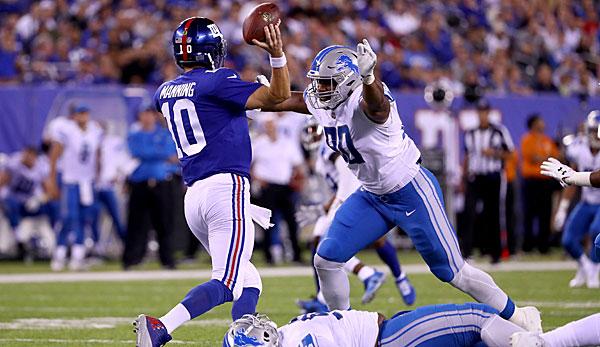 The Detroit Lions (2-0) have also won their second game of the season.In East Rutherford, they profited from a weak offensive line of the opponent against the New York Giants (0-2).However, it took a long time before a decision was made.

Eli Manning (22/32,239 YDS, TD, INT) was knocked down five times by the Detroit Lions Defense.New York’s performance in the Monday Night Game was a big disappointment, just like the week before against the Dallas Cowboys.The return of Odell Beckham Jr. (4 REC, 36 YDS), who played his first game of the season after an ankle injury, did not change anything.

Manning’s only touchdown pass was an 18-yard pass on Tight-End Evan Engram for the interim equalization in the second quarter.The rookie, however, then paid a penalty for unsportsmanlike behavior and allowed the Lions to start the following drive from the 45 yard line of the Giants.Matthew Stafford (15/21,122 Yds, 2 TD), who led the guests in the first quarter with a 27-yard pass on Marvin Jones on the right track, found Eric Ebron in his second score.

In the second half of the game, the Giants, who had been within reach for a long time due to a good defensive performance, had the chance to reduce the gap to three points, so they caught a holding penalty from the one-yard line at 1st and Goal and had to settle for a field goal.

The decision followed right at the beginning of the final quarter.Rookie Jamal Agnew returned a punt from Brad Wing for over 88 yards and found his way into the final zone.The resulting advantage could no longer be compensated for by Manning and the Giants.The big problems of the offensive line also resulted in another weak game on the ground.Only 62 yards were achieved here.

Odell Beckham Jr. (New York Giants):”Mental I felt good.Physically, I’m not sure how much it affected me.I’ve made my 20 to 30 snaps and I’ve tried to get the best I can.”

Matthew Stafford (Detroit Lions):”It was nice to play from a leading position.We did a very good job with First and Second Down all evening long.The running game was to be emphasized here in particular.The line did a great job.”

In a game that was evened out over long distances, the running game became a decisive factor for the Lions.The reason for this was the excellent performance of the Lions’ offensive line, which has repeatedly opened up gaps against one of the best fronts in the league.

This resulted in 86 Rushing Yards for Ameer Abdullah, 23 for Matthew Stafford and 20 for Theo Riddick.The Lions are not exactly known for a potent running game, so the last 100 yard rushing performance in 2013 came from Reggie Bush.Today, however, the work of the O-Line was decisive for the well-functioning running game.

In spite of the impetuous dominance of the Pass of Rush and a good defense, the Lions did not clearly set themselves apart for a long time.The defensive action was simply too constant.The guests got help through a special team play.

Jamal Agnew caught a punt from Brad Wing and was able to carry over 88 yards into the opponent’s end zone thanks to an excellent match and some very good blocks.The resulting 14-point advantage put the Lions in a comfortable position.They were able to control the watch aggressively and the Secondary could concentrate on avoiding big gains.

Lineman Ziggy Ansah missed several games last season due to an ankle injury and had to finish his bag yield at two.Meanwhile, there were three against the completely overtaxed Giants Offensive Line.

Ansah dominated opponents of Ereck Flowers and was therefore allowed to go several times almost undisturbed in the direction of Manning.Admittedly, the matchup was probably the easiest matchup to see this season, but he made the most of the given possibilities.

The Giants have no other option than to make changes to their offensive line.Tackle Ereck Flowers didn’t stand a chance against Ansah.

Flowers is now in his third season with the Giants and has already enjoyed a reputation as perhaps the biggest problem in the Giants-Offense after the first two years.This hasn’t changed after two games.Head coach Ben McAdoo has to find an alternative as soon as possible.Manning’s already taken a few brutal hits.

NFL: Böhringer in trial training with the Bengals
NFL: Brady:”Hope Kaepernick gets a chance.”