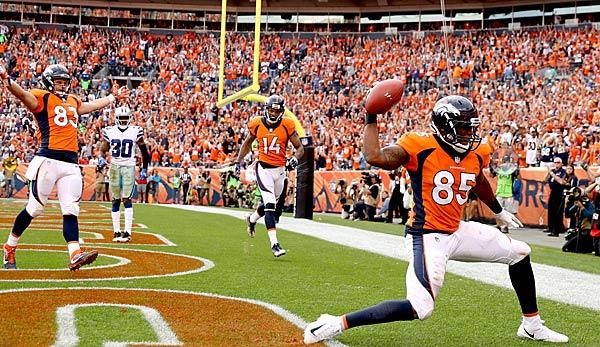 The Denver Broncos are thrilling, while the New England Patriots seem a little more like themselves.Furthermore: The problems of the Cincinnati Bengals, Russell Wilson and the search for a pocket, Carson Palmer’s broken arm, and, and, and – in the weekly column, SPOX editor Adrian Franke looks back on last week’s NFL.

If you followed my tweets on Sunday, the first topic comes as no surprise to you: This Broncos team is really fun.Yes, before the season, I had some doubts: Would the Run-Defense be better?How does the Defense generally work without Ware, Ray, Ward and especially with a new Coordinator?And what about the offense in which Siemian won the starting QB position for lack of alternatives rather than for great performances in the preparation for the season?

If you take the first two games as a guideline, then the Broncos are well on their way to answering these questions more than confidently.

Let’s start in the offense: Siemian showed several scenes in the first game against the Chargers (after a desolate pass, admittedly) which inspired me.This mainly concerned his behaviour in the pocket, the movements, the navigation against the pass rush and the courage to deliver against pressure passes and at the same time to use his agility in a meaningful way.He walks through his reads, the offense is versatile in passing play and therefore difficult to calculate.

Against the cowboys we saw what he could do when the enemy defenses didn’t generate any pressure: Siemian stood at 21/25,226 yards and four touchdowns on the placements without pressure against Dallas.Of course, we also praise the offensive line, which has improved considerably – although the presumed loss of Rookie-Tackle Garett Bolles could be of great importance here.

But also Running Back C. J.Anderson presents himself in dazzling form: 118 rushing yards, 76 yards after Kontakt and six Forced Missed Tackles against Dallas.Such statistics also make the line look even better.Denver has had a very good wide receiver duo with Sanders and Thomas for years, behind Anderson is Jamaal Charles, who seems to like the limited role.If Siemian can now confirm the really impressive performance in the first few games, the Defense will have even more opportunities to do what they do best: hunt for the quarterback.

However, a decisive defensive factor is the enormously improved run defense.After the Broncos had a clear weakness last season and allowed 4.2 yards per run, they are currently only 2.9 yards per opponent’s run.Of course, the sample size is still too small, so I had the fun to dissect the outstanding Run-Defense against the cowboy’s strong rushing offense in detail.

Elliott had a total of nine runs on Sunday, during which he ran a total of eight yards – five of which came late in the game on a single run.That was because the Broncos had a plan.It was an aggressive run defense with a built-in security net.

Specifically, Denver attacked almost the entire game in the Run Game with at least five players (one six, plus an all-out flash in the Goal-Line-Defense) immediately attacking the Line of Scrimmage.According to my count, Elliott only saw a 4-men rush twice in his eight runs, and only late in the game when Denver was already clearly leading 35:10.

The Broncos otherwise delivered the offensive line with five players directly, while mostly eight players were in the box.Two linebackers were able to move towards the ball, while a defensive back or one of the defensive linemes acted as the safety net.He was responsible for the Edge-Container, that is, neither Elliott nor Prescott carried the ball out to the outside.

Through the Scheme Denver also managed to keep runs inside again and again, where three defensive linemen plus linebacker Elliott were waiting for him.Above all, the comparison to the passport defense was conspicuous: Here you could see more 4-Men-Rush from the beginning, i. e. Denver relied more on the individual class of a von Millers, but also on the still sensational quality in the secondary.Miller and Barrett had two sacks, four QB hits and 21 (!) Pressures.

This numerically more conservative approach was given more stunts, something that was hardly ever done against the run.The Broncos have impressively demonstrated to Dallas that they have made huge strides forward in the run defense and a Shane Ray will return later this season.If the first two games of your own offense were not a runaway to the top, you have to reckon with Denver this year with the big goals.

Not only because there were questions about this, I wanted to take a quick look at the patriots’ openers against the Saints.Was this the big comeback show of the defending champion?Let’s say it was at least a good start.The passport defense looked good on some fought over passes, but was also lucky on some drops.The Run-Defense was hardly tested despite the Hightower failure, which was probably due to the gameplay and the early high Patriots lead.

But for me, however, the decisive conclusion is the same as after the bankruptcy of the opener: The Chiefs may withstand New England with the mixture of man-coverage and zone concepts underneath – the Saints do not.New Orleans practically couldn’t create a pass rush, and if it did, she cut up Brady (7/8,152 YDS, TD vs.Pressure).

Again and again he punished man coverage and attacked the safeties and linebackers in coverage, preferably with running backs and tight ends: only ten of Bradys 30 completions went to wide receivers (Hogan 5, Dorsett 3, Cooks 2).The running backs alone, which were also used in the slot without Amendola, caught 13 balls.If he had played through, Gronkowski would have had six more.

This victory was not a signal game or anything like that for me.But it was a good point of reference on how New England Coverages can manipulate and exploit.The next really exciting tests I’m looking forward to: Against Carolina in Week 4 and against Atlanta in Week 7 – two teams with explosiveness and cover skills in the Linebackers.

Page 1: The Broncos enthuse, Patriots vs.Saints and the number salad of Week 2