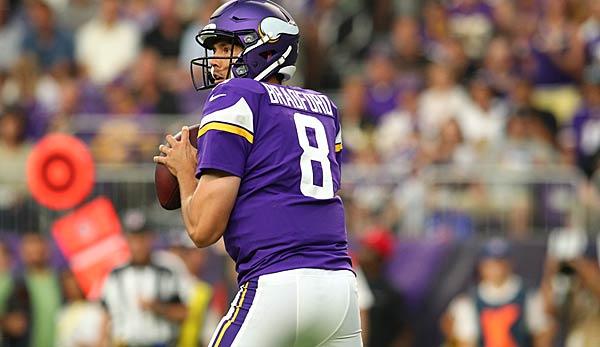 The Minnesota Vikings is plagued by a big worry line just before the duel with the Pittsburgh Steelers in Week 2: quarterback Sam Bradford apparently has persistent knee problems, his deployment wobbles.

ESPN insider Chris Mortensen reports.According to this, Bradford complains about “swelling, pain and discomfort” in his left knee.It is the same knee that Bradford had to undergo surgery for cruciate ligament tears in 2013 and 2014.

This also gives rise to a question mark over his Sunday campaign against the Pittsburgh Steelers – but internally, Mortensen continued, the vikings are to be “cautiously optimistic” with regard to Bradford’s possible campaign.

If Bradford, who had made a brilliant debut against the New Orleans Saints, would fail, Case Keenum would be his backup.If the worst case occurs and it is indeed a long-term knee injury, Teddy Bridgewater may also return during the season.This would make the already explosive quarterback situation in Minnesota even more complex.