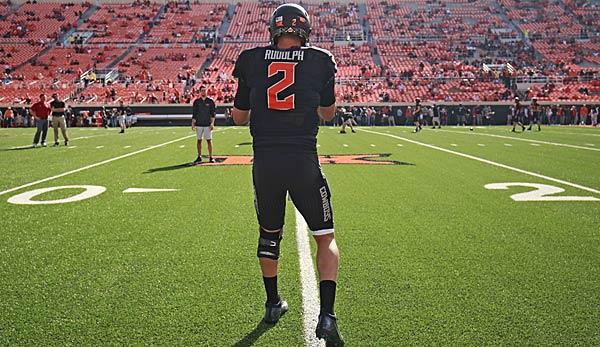 The upcoming draft is all about quarterbacks. Three QBs in the top 4 and four in the top 10 are anything but brave predictions, many experts bet on five quarterbacks in the first round. There is also a sixth candidate: Mason Rudolph has a real chance for round 1, SPOX takes a close look at Rudolph.

A major reason why the NFL is facing one of the most fascinating drafts of recent years is the variety of quarterbacks: with Baker Mayfield, Josh Rosen, Lamar Jackson, Sam Darnold and Josh Allen, not only is there a lot of quality – there are also five remarkably different types of players coming to the NFL.

A sixth candidate for this list is Mason Rudolph. Rudolph may not be an immediate NFL starter, but the facilities he shows are undeniable – and not just physical, like Josh Allen.

Oklahoma States quarterback of the last three years shows moves that should inspire NFL coaches, and with some time Rudolph could turn out to be a stroke of luck. Especially in view of the high prices that some teams at the top of the drag have to pay or are willing to pay to get one of the three or four top candidates.

After the detailed analysis of the top 5 quarterbacks in the upcoming draft, the question arises: Could Rudolph possibly even advance into this supposed phalanx?

If you deal with Rudolph, you will jump on a quality at an early age: Rudolph’s Deep Ball is a feast for the eyes. Not because of his arm strength, it’s not that extraordinary. Rather, it is a mixture of anticipation, touch and ball placement with which Rudolph regularly provides for big plays.

So it’s no coincidence that he played an impressive ten yards per pass in his last college season. Rudolph was from clean pocket one of the best scorers of the past college season, he gives Routes a chance and moves already well and fluently before and after the dropback.

He also shows some understanding of the game, especially when attacking gaps or weak points in the opponent’s zone coverage. Here he also helps with pump fakes or his eyes and pulls defenders out of the way.

Overall, Rudolph already shows the ability for excellent ball placement. When he knows where a good matchup is, he always gives his receivers a chance – and that without the defender having the opportunity to get to the ball.

On the other hand, it is also no coincidence that Rudolph – at least with most experts – is not mentioned in the same breath as the top candidates of the Drafts. To be precise, there are two very concrete reasons for this.

On the one hand Rudolph has visible problems with pressure again and again, and this in two ways. On the one hand, he has a bad sense for edge-rushers and identifies them before and after the snap too rarely.

On the other hand, he feels visibly uncomfortable outside the pocket. Rudolph is reluctant to leave the pocket, but at the same time quickly becomes insecure in the pocket during a game if his read is not there as hoped. Then you get the impression that Rudolph doesn’t trust what he sees and reads. He holds the ball too long in these scenarios and at the same time sticks it in a collapsing pocket, which is why he often runs into Pass-Rusher.

The other problem is its inconsistency as far as Reads and Accuracy are concerned. The former is particularly noticeable when Rudolph sticks to a read and throws the ball despite coverage. The latter is particularly noticeable against man coverage, or when Rudolph has to get a ball into narrow windows. If nothing is open in a zone coverage, Rudolph’s problems become (even) greater.

The big question that teams at Rudolph will ask themselves is: Can the weaknesses be eliminated through coaching – or is it not more than a project that will never develop into a top 15 quarterback in the NFL due to some central problem areas?

While Josh Allen’s physical potential is enormous, but you don’t know if a coach can put all this together, Rudolph’s question is whether the potential for really great things really exists – or whether the frame for him is already more or less fixed at the top and bottom. His arm, his behaviour in the pocket, his difficulties with Reads certainly provide arguments for it.

However, the upcoming quarterback run could flush Rudolph into the late first round. Teams should not underestimate the advantage that a first-round pick with the Fifth Year option can be kept comparatively cheap for another year. Quarterbacks are more lucrative for teams than any other position.

However, Rudolph will have to make significant progress in the NFL in dealing with the pass rush and in the speed and consistency of his reads and progressions. This also applies to his accuracy with short passes. Improvements in these areas cannot be ruled out, but they are anything but a matter of course.

If he does not succeed, he will not be able to become a long-term NFL starter.