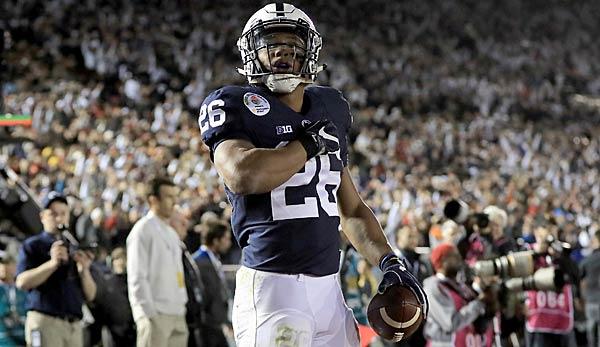 Running Back Saquon Barkley is for many the best player in the upcoming draft in isolation – and yet the question remains: How high can the running back really go due to the position? Where Barkley’s NFL career as a professional begins will be decided when the NFL draft starts in Dallas on April 26. He won’t have to wait too long: he’s too good as a prospect.

In late December 2017, Barkley won the Fiesta Bowl with the Penn State Nittany Lions – it was the culmination of his three years at college. Against the Washington Huskies, the running back ran 137 yards in 18 attempts, scoring two touchdowns.

Everyone knew that this was Barkley’s last game for the Harrisburg school. Two months later he joined the NFL Scouting Combine and confirmed what many in the USA already knew.

Saquon Barkley will be a top 10 pick in the draft. At least.

The fact that running backs are picked very high is not a matter of course, but it is an emerging trend. In the last three years there has always been a running back in the first ten picks of the first round. With Ezekiel Elliott and Leonard Fournette the Cowboys and the Jaguars even gave away their fourth pick in the last two years.

Barkley could even be drawn by the Cleveland Browns in first place in the first round in 2018. That was the last time in 1995, when the Cincinnati chose Bengal’s Ki-Jana Carter, who also played at Penn State College. Quite a few experts had also predicted such draft heights, at least for some time in recent weeks.

This fact shows that Barkley must be a very special player. Especially on the running back position, it is said, the differences in the league are by far not as big as on other positions. The quality is closer together, the selection for the teams is therefore higher.

However, Barkley’s appearance at the Combine gave another answer to the question why he should be so valuable – and finally screwed his predicted pick into the top four.

In bench press he did more repetitions than the former offensive tackle Joe Thomas, in running and jumping he did better than the wide receivers DeSean Jackson, Devin Hester and Julio Jones.

This total package of talent, strength, agility and speed is what tempts many experts to call Barkley the best player in the draft. And so at Barkley not only his actions on the field are known from highlight videos – but also his training units in the PSU weight room.

The value of running backs is currently the subject of much debate. Le’Veon Bell, currently the best back in the league, can no longer agree on a new contract with the Pittsburgh Steelers. Bell demands payment similar to that of his prominent team-mates Ben Roethlisberger and Antonio Brown. Both belong to the elite in their positions.

Bell himself will rightly point out that his style of play differs from all other backs in the league and that he is therefore indispensable for Pittsburgh’s offense. That he influences the game in various ways.

If Barkley is drafted early, he will be expected to deliver something special to the court to justify his value. This is because NFL teams part with averagely good running backs much faster than quarterbacks or receivers, which do not display outstanding figures, but also do not make a conspicuous number of mistakes. Or just solid players in other positions, for whom you have invested a lot.

The problem with running backs is, on the one hand, that they are predicted to have a rather short career, as the constant hits make them more vulnerable to injury. In addition, a player in this position lives from his speed, which often decreases rapidly beyond 30. On the other hand, the run game itself has clearly lost importance for a team’s success over the past few years, so running backs must play a central role in passing in order to really distance themselves from other backs.

For these reasons, only the very best running backs receive highly endowed working papers after their rookie contract has expired. Often teams choose the cheaper way and prefer a younger and faster rookie in the next draft. Also in the later rounds, when the rookie deals become significantly cheaper again.

When Barkley goes to the Browns at one, he is expected to mark a decade in Cleveland. Because for less, no team will give up its first pick in the draft. He would also play Bell and the Steelers twice a season for the time being. The one who should become the best in his position, against the one who already is. That wouldn’t relieve the pressure on Barkley.

But even if he should go to the New York Giants – or about 4 after Cleveland – in second place, the expectations will not be much lower. Even if the conditions in the Big Apple are very different from those in Ohio: The Giants have two more stars on the offensive, Eli Manning and Odell Beckham Jr., who would take Barkley out of the limelight.

At the same time, however, New York would take a huge risk in the scenario and let the chance of his quarterback of the future pass. Barkley would be the ultimate win-now pick – no small burden right from the start.

Should the Browns draft a quarterback in the first place, the way would be clear for Barkley back to his hometown, albeit to a certain extent to the “wrong” team: In 1997 Barkley was born in New York’s Bronx district – and grew up as a fan of the New York Jets.

Later his family moved to Pennsylvania. There he first played football at Whitehall High School before going to PSU. And with a resounding success: In his first year with the Nittany Lions, he promptly set a new internal school Freshman record of 1,076 yards.

Now Barkley could return to New York, but in the uniform of the Giants. “Every team that wants to draft me and gives me the opportunity to play in the NFL is a blessing,” he said on the sidelines of the Scouting Combine.

When asked if a running back could be considered first if the quarterback class was so promising this year, he expressed himself very confidently: “I don’t think it makes sense that I can’t get to the first place just because I’m a running back. I respect all the guys who won the Heisman Trophy. “But I still don’t think they’re on the same level as me.”

Isolated – independent of the value of the position – it is not difficult to agree with Barkley here. The nephew of the former super middleweight boxer Iran Barkley is a 100-meter sprinter, wrestler and long jumper, is a real 3-down-back and can immediately shape a team with his smooth movements, the cuts, the explosiveness as well as his abilities as receiver and returner.

Moreover, at a time when even the smallest (and sometimes very large) misstep of prospects is dissected in public before the draft, it is as clean as one can only imagine. Barkley is considered an incredibly hard and disciplined worker, has no derailments in his past – and is simply a nice guy.

But there are several anecdotes, perhaps the best one is the one from Barkley’s athletics days: At a tournament in 2015, the participants of the competition for mentally handicapped children were on the course for the first time at the same time. As Barkley’s long jump was due, her 400-metre run took place in parallel – and Barkley refused to make his jump despite increasing pressure from the impartial before the 400-metre run was completed and the last child over the finish line. He didn’t want to take their spotlight away.

Most experts are now predicting that Barkley will end up either with the Browns or the Giants. Cleveland might even get Barkley in fourth place. This would require both the Giants and the Jets to select a quarterback. Nobody doubts that the jets will do this after the expensive trade with the colts.

If the browns trade their fourth pick, the first four selected players could all be quarterbacks. Then Barkley would drop to fifth place where Denver could pick him – the Broncos have just fired C.J. Anderson.

Among the top 10, Tampa Bay (7) and San Francisco (9) would certainly also be keen on him. Barkley will certainly not have to wait longer than the 49ers to be drafted.

And then he has the chance to prove to the league that a top 10 pick in a running back can still be a good decision.

NFL: Draft: Mason Rudolph – the quarterback (secret) tip
NFL: Thomas not at the training start of the Seahawks