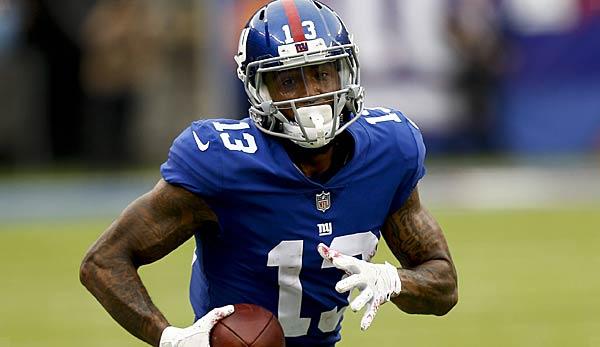 Wide Receiver Odell Beckham is apparently staying with the New York Giants for weeks. After the rumour mill had sizzled at times, a trade is supposed to be off the table by now.

This is reported by ESPN insider Adam Schefter. As a result, the other teams now assume that Beckham will not be traded at least “before or during the upcoming draft”. This is a new development, so far, Schefter continued, the teams had expected an OBJ trade to be realistic.

Beckham himself had already recently sent a clearly positive signal to the Giants when he arrived in New York for the start of the off-season workouts. These are voluntary, Beckham had been training away from the team at the same time last year.

The decision to report back to the Giants now is likely to have been taken in the Beckham camp with the ongoing contractual talks in mind. The receiver enters the last year of its contract.

Originally, the trade rumors also arose because team owner John Mara had not only publicly criticized his star receiver, but had also strongly fueled trade speculation. In combination with Beckham’s request for a new contract, reports circulated just hours later that OBJ could sit out most of the season’s preparations and possibly even go on strike in the regular season.

These reports were obviously false, but the trade rumors were true. Ralph Vacchiano of SNY reported a few days ago that there were indeed several requests for a change of the wide receiver. But the high price, which the Giants reportedly demanded, deterred the interested parties.

Among other things, the Los Angeles Rams were previously intensively associated with OBJ. L.A. recently took brandin cooks from the New England Patriots instead.