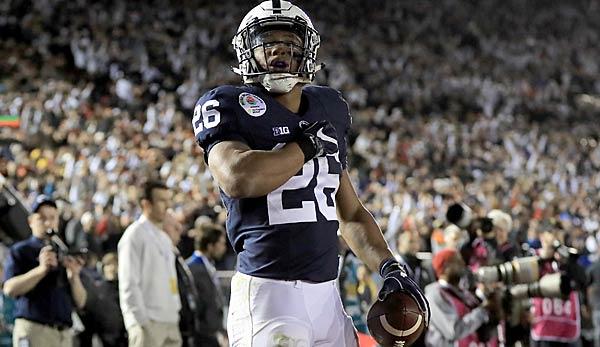 When should you draft a running back draft – and is the value of the position so low that an early pick in the draft is no longer worthwhile? How has the landscape in the NFL changed so that the once dominant position in every offense has fallen away? In the new column, SPOX editor Adrian Franke looks at the running backs controversially discussed before each draft.

In the meantime, it has become an annual draft topic: Should I get a running back in the top 10 of the drafts? Possibly even in the Top 5? Or should backs be ignored in the first round?

After writing history in 2013 and 2014 and not having made a running back in the first round in either year, another trend can be seen in recent years: After Todd Gurley (10 overall) and Melvin Gordon (15) in the 2015 draft, running backs followed one after another in the top 4: Ezekiel Elliott in 2016 and Leonard Fournette in the previous year.

There is a good chance that this trend will continue. With Saquon Barkley, a running back enters the draft stage this year, ahead of Elliott and Fournette in terms of overall talent. There were three running backs in the Drag’s top five in consecutive years, most recently from 1999 to 2001 (Edgerrin James, Jamal Lewis and LaDainian Tomlinson).

For a while there were even persistent rumours that the Browns could go with the first overall pick Barkley instead of a quarterback. There are still enough people who argue for this variant – a big mistake, so much is anticipated.

But how can these sometimes distinctly varying opinions on running backs be explained? How do those who wouldn’t draft such a promising player as Barkley in the top 10 argue? A look at the potentially equally important and interchangeable position in the backfield of every NFL team.

Spread formations, 3 and 4 receiver sets, rule changes, the dominance of the short pass game, which often acts as an extension of the run game: the run game per se has become less important. The figures confirm this, historically the last four seasons had the lowest average rushing attempts per game. 2016, with an average of 26 runs per team per game, was the historic low.

This is also reflected in the peak where a cut can be observed from 2014 – on the one hand in the number of teams with more than 30 runs per game, and on the other in the top scores. By comparison, the 2009 jets led the league with 37.9 runs per game.

The latest trend that also schematically limits the run game are the run pass options: potential running games where the quarterback has the option to keep and throw the ball himself.

Such tactical elements as well as rule changes in the sense of passing, spread quarterbacks from college and a clearly growing passing scheme variety and efficiency have pushed the run game to the sidelines.

The development that once began with Bill Walsh and his West Coast Offense has thus reached its peak: The importance of the Run Game for the success of a team is significantly less than that of the Pass. Since about 2004 – when passport interference rules became stricter – passing efficiency has been on a constant, permanent advance.

This is underpinned by various advanced stats. In its Rushing Report study after last season, Pro Football Focus found that from the point of view of running backs, pass blocking, yards per route run and receiving have the greatest influence on a team’s overall victories. The role of the running back in the passing game is more important than his qualities as a runner.

The rushing efficiency of a team also has only minimal significance for its sporting success. Last season, for example, Cleveland (4.5 yards per run), Green Bay (4.5), Chicago (4.2) and Oakland (4.2) were four teams in the top 11 in terms of yards per run that had nothing to do with the playoffs. In Cleveland’s case, worse.

The passing game on the other hand: Seattle’s offense in the two years with Marshawn Lynch and without Russell Wilson as an offense was significantly below the average for passing and rushing according to the “Expected Points Added” formula (especially down, distance to first down and starting position of the game are taken into account, more exact explanation here).

That changed with Wilson. What’s more, between 2012 and 2014 Seattle was only once below the Rushing League average for EPA per Attempt for the 2013 Super Bowl season, and in Wilson’s best Rushing season of 2014 (849 yards) the EPA per Attempt was the worst in the Wilson era until 2016.

Another example is the Dallas Cowboys and their rapid development from 2015 to 2016, when, according to Football Outsiders’ DVOA metric, Dallas’ Offense jumped from 31st to 3rd place, which is still largely associated with Ezekiel Elliott. In fact, however, it was the massive improvement in passing (from 31 to 3 according to DVOA) that made this jump possible.

The Run Game actually climbed from ninth to second place, but Prescott was the third-best quarterback in Rushing’s EPA – only Colin Kaepernick and Tyrod Taylor were better in this area in the 2016 season – a very high percentage.

To put it more simply: Elliott’s share in the positive development of the cowboy open was much smaller than the pure yard numbers would suggest. With a comparatively worse running back, similar successes would have been possible. Much cheaper players like Jordan Howard, Carlos Hyde, Bilal Powell, Isaiah Crowell and Derrick Henry even ranked above Elliott in very similar DVOA areas, Henry and Powell.

Doesn’t mean Elliott had a bad season. On the contrary. But it is said that even a very good season of a running back – in terms of rushing – has only a clearly limited influence on a team’s success and failure in today’s NFL. This must be taken into account in the draft.

But it is not simply the importance of the run game for the success of a team that justifies criticism of high running back picks. While the run game has actually become less and less important when viewed in isolation, one thing has not changed: No skill position player – except the quarterback – has the ball in his hand more often during a game than the running back. A certain level must therefore also be given at this position.

However, the availability of highly talented backs in the middle rounds of the drag is at least as strong an argument against high picks in a back. In a study, SB Nation found out that since 2004 a total of 17 running backs have been drafted with a top 20 pick. Their stat line in the NFL: 18,991 Carries at an average of 4.2 yards per run – the exact yards per run average for this period calculated for the entire league.

Only seven of these 17 running backs have an average of at least 4.3 yards per run, so the statistical difference is minimal in most cases.

As a smaller sample size, a look at last season’s most efficient top rushers also helps:

Disclaimer: Only backs with at least 120 runs were considered. Players are sorted by yards per run.

Not mentioned here is Cam Newton, Carolina’s quarterback is still the quarterback-rushing anomaly with 139 runs for 5.4 yards/run and six rushing touchdowns and was the only non-running back over 100 rushing attempts.

Here the mixture and the small discrepancy between different draft rounds becomes clear: Besides the former first round picks Ingram, Gurley and Lynch there are also the third round picks (Kamara, Hunt, Drake) and later candidates like Freeman and Powell (4th round), Lewis and Collins (5th round) or Blount and Darkwa (undrawn).

Gurley in particular can use the past season as an argument against the high running back pick. With all his talent, the former top-10 pick 2016 had a disappointing season in a dysfunctional offense with little talent around him (3.2 yards per run on 16 starts). Over his first two NFL seasons, he made at least 75 yards and 4.5 yards per run in just five of 29 games.

Only the change of coach to Sean McVay, who made it a focus of his offense to make room for Gurley, as well as the upgrades in the offensive line and in the receiving corps paved the way to Gurley’s outstanding pre-season.

Disclaimer: Players are sorted by DYAR metric – Defense-Adjusted Yards Above Replacement – from Football Outsiders. The yards of a player are not only brought into the context of the game situation and the opponent’s strength, but above all how much better the respective player is than a hypothetical, statistically “created” replacement.

PFF also found in its report that yards per run is one of the most unstable statistics in the NFL from year to year. This is also due to the fact that it is statistically difficult to establish a connection between, for example, forced missed tackles or yards after contact with opponents with the yards per run.

What do these trends and statistics mean in practice? Put simply: In the medium and long term it is almost never worthwhile to draft a running back. “Almost” because – as with any rule – there are a few exceptions.

The clear condition for this must be that the running back has a significant influence on the passing game beyond screens. Le’Veon Bell and David Johnson (second- and third-round picks respectively) are the current yardstick for this, as they are regularly deployed on different receiver positions and actually represent a threat as receivers – just like runners.

So, and only then can a running back actually be a mismatch player with whom you can force the defense into unfavorable matchups and exploit a base defense. It is the only way a running back can make a real difference individually in the medium and long term in terms of your team’s winning rate. Saquon Barkley could reach these heights, legitimizing the Barkley debate in the top 10. But he also has to, in order to justify such a high pick.

A running back is not worthless, most of the players in the position are statistically comparatively interchangeable. You have to invest resources, but the difference between a highly chosen back and one from the middle rounds is often small.

Under this premise a high pick is in most cases a too proud price. Fournette, whose best qualities are clearly those of a runner, falls into this category and with the cowboys one can argue very well that it would have been a better team today if one had taken Ramsey instead of Elliott in the draft Jalen at that time and trusted in the run game primarily on the offensive line, in which one had already invested a lot.

This is also reflected in the price. According to quarterbacks, besides pass rushers, top cornerbacks are the luxury position in terms of cap hits in terms of price, which makes Ramsey (cap hit 2018: 6.36 million dollars) or Saints-Corner Marshon Lattimore (3.4 million) a real bargain. Elliott (6.8 million) and Fournette (6.1 million), on the other hand, are in the top 7 despite rookie contracts.

These things must be kept in mind when heading for the draft. Every year.

Page 1: The value of the running back and how to approach the position

Page 2: Tape Analysis: Which Running Backs are available besides Barkley?