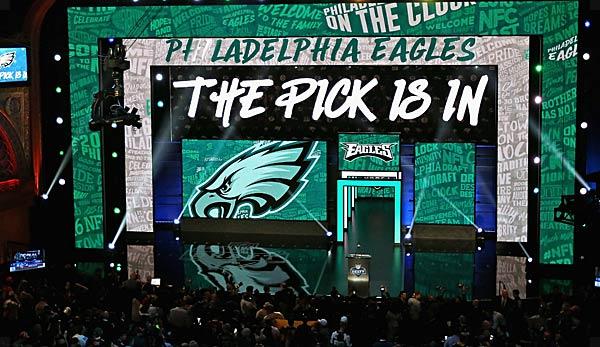 The NFL Draft 2018 is coming up, from April 26th to 28th! Until then, the big riddle lies ahead: Who is interested in which player? When do the quarterbacks leave the board? And who else manages to trade up after the Buffalo Bills and the New England Patriots? SPOX editor Adrian Franke will forecast the first round with a total of three mock drafts, here’s the overview.

Draft 2018 will take place April 26-28, local time at the Dallas Cowboys Stadium in Arlington, Texas. The draft will be held for the first time in an NFL stadium in its 83rd edition, and it is also the first draft to be held in Texas.

The first draft round starts on April 27th at 2am German time. On the second day, the second and third rounds will take place, and on the third day, rounds four to seven. The NFL Network broadcasts the complete draft live.

Cleveland Browns-1 Sam Darnold, QB, USC. The Browns have been looking – one could say for decades – for their franchise quarterback for years. This year they find him in position with the perfect interim solution in Tyrod Taylor.

2nd New York Giants – Saquon Barkley, RB, Penn State. It would make sense to get Manning’s heirs here. But: The new regime believes that Eli still has two to three years left in the tank – and provides him with Barkley, the best player in the draft.

3rd New York Jets (of the Colts) – Josh Rosen, QB, UCLA. The jets are high with the goal of finding their franchise QB. That’s exactly what they’re doing here: Rosen is by far the technically strongest QB in this class and can learn behind McCown.

4th Cleveland Browns (of the Texans) – Bradley Chubb, DE, N.C. State. The desire to get Barkley and Darnold together doesn’t work. But there is the clearly best pass rusher, who together with Myles Garrett forms a frightening duo.

5th Denver Broncos-Quenton Nelson, G, Notre Dame. The Broncos potentially rely on Case Keenum for two years (and ideally more). With Nelson, he gets spectacular support and one of the 2.3 best players in the draft.

6th Indianapolis Colts (from the Jets) – Minkah Fitzpatrick, DB, Alabama. The best defensive back in the draft goes to a team that needs help almost everywhere. Fitzpatrick can be the heart and brain of Colts-Defense for the next 10 years.

9th San Francisco 49ers – Roquan Smith, LB, Georgia. Smith is tremendously explosive, can defend the run and pass and is exactly the kind of linebacker the NFL wants today. If Reuben Foster wasn’t banned, SF would have the top LB duo.

10th Oakland Raiders – Vita Vea, DT, Washington. The Raiders are disappointed in this scenario, as 2 linebackers walk away directly in front of them. Vea is a nice consolation prize: Oakland desperately needs disruptive players next to Mack, Vea is just that.

11th Miami Dolphins – Baker Mayfield, QB, Oklahoma. It’s an open secret that Miami wants a QB – and that you really enjoy Mayfield. He is a leader, already a very good passer and fits into Miami’s new philosophy.

12th Buffalo Bills (of the Bengals) – Josh Allen, QB, Wyoming. Allen won’t fall that far – Buffalo might trade up for him. The most physically talented QB in this class has worked on his technique, but still has a long way to go.

14th Green Bay Packers – Josh Jackson, CB, Iowa. The packers are increasingly running out of cornerbacks, a new starting partner next to last year’s rookie Kevin King is being sought. Jackson is just that: A big physical press corner for Pettines Defense.

15th Arizona Cardinals – Lamar Jackson, QB, Louisville. Arizona’s gonna have a hard time getting to the top QBs. Jackson could turn out to be a very good “consolation prize”: An incredibly dynamic QB that needs to become more consistent register.

18th Seattle Seahawks – Isaiah Wynn, OG, Georgia. Could start right next to Fluker and help finally give Seattle a solid interior line. With the top DBs from the board Need meets solid value here.

19th Dallas Cowboys – Courtland Sutton, WR, SMU. Dallas is in dire need of fresh blood in the Receiving Corps. Sutton is a big, physical player and gives Prescott directly a reliable target. Could quickly become the number one in Dallas.

20th Detroit Lions – Derrius Guice, RB, LSU. Detroit has needed a dominant running back for a long time. Guice is a physical power runner who reads his blocks and the defense very well and finally relieves Stafford constantly.

21st Cincinnati Bengals (by the Bills) – Connor Williams, OT, Texas. Cincy doesn’t need long for the pick. After the trade for Cordy Glenn there is either a second starting tackle with Williams – or a starting guard, depending on your assessment.

22nd Buffalo Bills (by the Chiefs) – D.J. Moore, WR, Maryland. Kelvin Benjamin’s contract expires, Zay Jones had a disappointing season and just had an unpleasant incident. Moore is considered a reliable type and is an explosive receiver.

24th Carolina Panthers – Will Hernandez, G, UTEP. Comparatively easy pick here. Carolina is known to have lost Andrew Norwell, with Hernandez they get an agile, physical guard as an ideal replacement.

25th Tennessee Titans – Marcus Davenport, DE, UTSA. An inside linebacker would be the wish here, but the top candidates are all gone. Instead, there is perspective support for the pass rush, which is also urgently needed.

26th Atlanta Falcons – Da’Ron Payne, DT, Alabama. Atlantas squad doesn’t have too many gaps – but defensive tackle is one of them after Poe’s departure. Payne is a spectacular athlete and versatile DT who influences the run and passing game.

29th Jacksonville Jaguars – Maurice Hurst, DT, Michigan. Hurst is currently difficult to estimate, as an abnormality was found in his heart with the Combine. Athletically it is one of the top DT in draft and could turn out to be a steal.

30th Minnesota Vikings – James Daniels, G/C, Iowa. The Vikings have to address their interior line in the draft, and the way the board falls fits perfectly: Daniels may be better positioned as a center, but he can definitely also play guard.

32nd Philadelphia Eagles – Kolton Miller, OT, UCLA. Peters is in the final stages of his career, Vaitai is not a long-term solution. Miller can be just that and gets the chance to work on his consistency behind Peters.