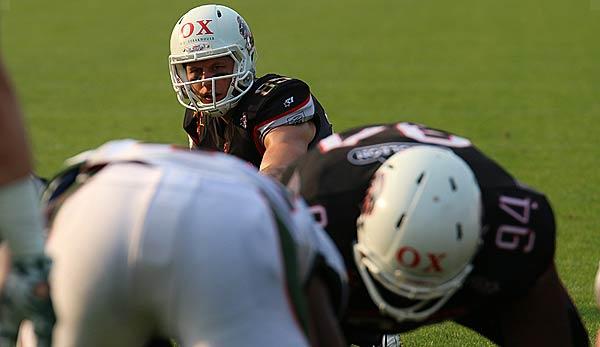 Depression in sport is still a taboo topic – all the more so in football, which is characterised by hardness and toughness. In a detailed DAZN feature, former GFL quarterback Dennis Zimmermann, perhaps the most promising German quarterback of all time, spoke to Mathias Liebing of Die Sportpsychologen about exactly that – and explained how the disease ended his career. His then player and receiver Christian Bollmann now gave Liebing’s colleague Miriam Kohlhaas further insights.

Christian Bollmann did not see the tears of Dennis Zimmermann in the half of his last American football match in July 2011. How could he? His quarterback was – as is typical for depressed athletes – a master of hiding.

Hardly anyone in the New York Lions team had noticed how bad Zimmermann really was in those weeks and months until the sudden end of his career during the break of the German Football League match Stuttgart against Braunschweig.

“It became clear in his last games that Dennis made for us that he no longer achieved his usual performance,” recalls Christian Bollmann. But the backgrounds remained hidden from the Wide Receiver and the 60 or so teammates at the Lions.

At that time, nobody recognized the signs of his mental illness. Bollmann: “I remember Dennis shutting himself off after the games and saying that he was pissed off and he wasn’t feeling well.”

The teammates, coaching staff and counselors at the New York Lions were overwhelmed. Only the then club chairman Ute Schmidt, who maintained a close and confidential relationship with the players anyway, talked to Dennis about more than the past match.

However, when the illness finally drove the 83 kilo power pack into a corner after his decision in the half time of the Stuttgart game, Zimmermann was alone.

“In 2011 there was this situation in Stuttgart, which was also my last game I ever played,” he told DAZN openly. “The play was such that two ball receivers are sent deep, which run freely behind the linebackers – and one receiver was ultimately really open. As quarterback, you throw the ball and think:’This is the perfect ball at the perfect moment.'”

In the second, however, a linebacker jumped up and caught the ball with one hand, and that was the situation for me where I said for myself: If something like this goes wrong, I have no business on this court. It was clear to me at that moment that my career was over.”

He found help from a psychotherapist, with whose professional support he understood his situation and the severity of the disease. “I took three weeks off then. Ultimately, I was helped by the therapy that started at that time, the knowledge about me and my life and also the medication,” says Zimmermann, who worked in a gym in Braunschweig and is now successful as a personal trainer.

Zimmermann’s career, which many experts considered the best German quarterback, broke up on July 25, 2011 in Stuttgart. For good. At least on this point, his former team-mate Bollmann is convinced, the situation in German football has improved.

Bollmann: “Players are now more aware that they can seek help. Dennis’ openness in the DAZN feature fully supports this, of course.”

National player Bollmann has been working with sports psychologist Miriam Kohlhaas for several months. Besides many sporting aspects, he can also talk to her about mental problems.

The workload that amateur athletes in Braunschweig have to reconcile with top sporting performance is one such topic. Bollmann: “Football teams are a colourful bunch. Some can handle the pressure and the other problems well, for others it is absolutely advisable to get support through the sport psychology”.