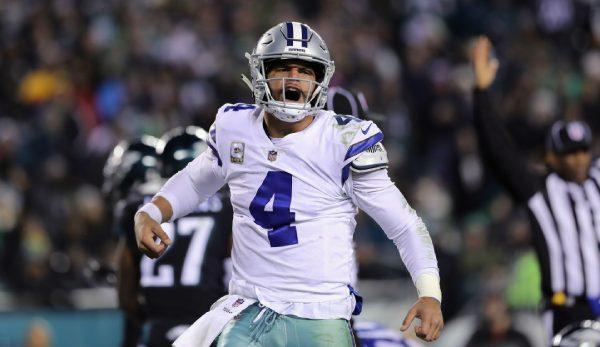 The playoff race is entering the hot phase. Numerous teams are already fighting for their last postseason chances. The Saints want to make amends in Tampa in two ways, while in Kansas City there is a battle of extremes. In the AFC South and the NFC East, there are real division crackers waiting. And: Green Bay is experiencing the beginning of the post-McCarthy era.

A duel that is unlikely to cause tongues to crack in the present. Both the Bills and the Jets didn’t look good for most of the season, the playoff race is not a surprise for both franchises. But: For the future the duel on Sunday could be trend-setting.

On the one hand we see the two rookie quarterbacks Josh Allen and Sam Darnold in a direct duel. Both youngsters already missed several games in this season, in the first meeting of the Bills and Jets the quarterback duel was called Matt Barkley against Josh McCown (Uff!), now we see probably for the first time the two Rookies against each other. Darnold returns after a three-week break due to a shoulder injury, Allen showed some unconventional but convincing performances in the last two weeks – with about 200 Rushing Yards!

At the same time, the game should of course have a big impact on the draft order in the coming year. After six defeats in a row, the jets would currently choose third position, the number one pick still seems within reach. With only one victory more than New York, the Bills are now only on the verge of the Top 10: Right now, Buffalo would be ninth. These rankings are likely to have changed again on Monday.

Injured, the Redskins’ promising season is in danger of becoming a lost year. With a solid defense, led by a strong defensive line, and a conservative but capable offense, Head Coach Jay Gruden’s team was on a playoff course for a long time. However, numerous failures in the offensive line, in the receiving corps and now even in the quarterbacks have turned this undertaking into a mammoth project.

With Mark Sanchez under Center, it’s safe to assume that Washington will go into the game on Sunday in an arch-conservative manner. Adrian Peterson is allowed to adjust to many Carries, moreover the short pass game should stand still more in the focus. After all: Against tight ends the Giants showed their defensive problems several times this season. In addition, Safety Landon Collins is missing, which was set to IR and will no longer be used this year.

After three victories (and a narrow defeat to the reigning Champ) in the last four games, New York can now even enter the game with a small amount of confidence. Saquon Barkley could be the key to victory against the Redskins’ increasingly weak Run Defense. Always interesting, of course: the duel between arch-enemies Odell Beckham Jr., who has had four touchdowns in the last four games, and Cornerback Josh Norman.

It wasn’t three months ago that the Bucs had a real surprise. The underdog from Tampa Bay won with backup quarterback Ryan Fitzpatrick at the super bowl favorite New Orleans. Fitzpatrick took apart the Saints Defense and scored five touchdowns. And fans and experts asked themselves: Can the Buccaneers play at the top? Do the Saints fall back defensively into old patterns?

Today can be said: no. Despite most of the league’s passing yards, Tampa Bay is (almost) out of the playoff race and the Saints are among the best teams in the league thanks to a good defense. Nevertheless, the game again offers a lot of shootout potential! The offense around quarterback Jameis Winston brings enough talent to score points against any opponent and the Saints are likely to be looking for revenge after their worst offensive performance of the season.

With a brutal pass rush and speed at the linebacker level, the cowboys made life difficult for the Saints in last week’s Thursday Night Game. Tampa should be exactly the right opponent. Hardly any defense is more susceptible. Drew Brees, Alvin Kamara and Michael Thomas will all be squinting at monster performances. The big question: Can Winston counter this offensive power? And above all: Avoid turnovers. After eleven ball losses in just four games, Winston, who continues to play for his future with the Bucs, has now made two mistakes. But with Cameron Jordan, Sheldon Rankins, Marshon Lattimore and Co. in the Saints-Defense a different calibre awaits the 24-year-old.

A week. Only in one of thirteen weeks this season did the Dolphins have a negative record. Since the start of the season, the Dolphins have been in the circle of solid teams and at least within reach of the play-off ranks – but hardly anyone talks about Miami. With the Patriots and the Vikings as opponents in the next two games, however, this respectable ride could end in the next two weeks.

Ryan Tannehill. William Hayes. Albert Wilson. Jakeem Grant. Despite numerous serious injuries, Head Coach Adam Gase has found ways to at least give his team a chance to win. Whether this can succeed against the Patriots is questionable – especially because Star Cornerback Xavien Howard (knee) is out of action.

Nevertheless: New England does not expect a self runner. In fact, the Patriots lost four of their last five games in Miami. In addition, the Patriots Open still seems good this season, but not as dominant as in previous years. The Dolphins were quite vulnerable in defending running backs this season. James White and Sony Michel could celebrate a big game.

Page 1: Rookie duel in Buffalo, reparations to the Saints and the Patriots as guests at their Kryptonite

Page 2: Battle of Extreme in KC, Division Summit in the AFC South and the Beginning of the Post-McCarthy Era

Page 3: Must-Win-Game for the Broncos, Steelers-Recovery at the Raiders and the fight for the NFC East