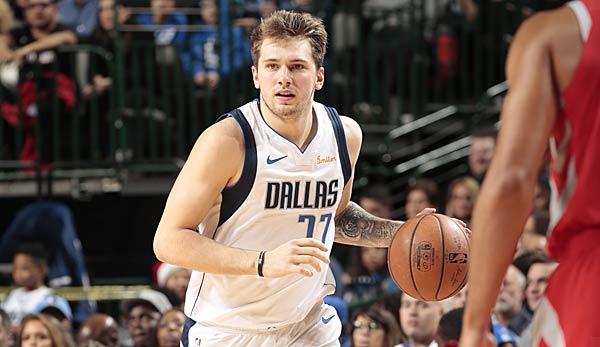 The Dallas Mavericks (13-11) win for the ninth time in a row on their home court and thus draw level with their series from the 2010/11 Championship season. Luka Doncic decides the match in the final phase and seals the 107:104 victory (BOXSCORE) against the Houston Rockets (11-13).

Rookie Jalen Brunson was again in the Starting Five as a substitute for Dennis Smith Jr. Sophomore dropped out for the second game in a row due to an injury to his right wrist. Meanwhile Maxi Kleber was not ready for action due to an unknown injury on his toe. Otherwise there were no surprises at the beginning and both teams started directly hot into the match.

The Rockets immediately sink their first two throws from the corner, this season they took the second most throws from this spot. But also the Mavs found their rhythm immediately and proved particularly much employment at the offensive board, DeAndre Jordan had at this time often the fine little hand.

In the first five minutes, there were seven changes in the lead and the game was played quickly on both sides. However, the rockets had clear problems in the transition defense, too often they were too slow and or inattentive and thus allowed simple points or were forced to fouls.

After seven minutes Harden finally got his third foul from Luka Doncic, who led him cleverly to the three-way line. So the Shooting Guard had to score 10 points on the bench. His team then had a hard time scoring, which the Mavs mercilessly exploited. In the end, Houston started an 8-0 run and stayed in the game, potting six threes in the first quarter alone.

Furthermore, the match remained tight, although both teams sometimes made questionable decisions and things were very hectic on the court for quite some time. But until halftime Jordan was extremely active, worked under the basket and already had 12 points and 10 rebounds on his account.

At the restart there were already 15 leadership changes to marvel at and Harden directly transformed his fifth throw from downtown. However, four fast turnovers of the Rockets followed one after the other, so that the Mavs were able to take the lead again. Brunson (14 points) heated up the fans in Dallas in this phase and hammered the Fastbreak Dunk in.

Nevertheless, Houston stayed on it, led by their veterans Harden, Chirs Paul and finally Eric Gordon again, because the 30-year-old could last rarely convince and expressed his dissatisfaction. More and more the dominance of the MVP stood out in the next minutes, he met some of his legendary step-back-threes and led his boys self-confidently. Despite Harden’s 15 points in the third section of the game, it went with a tie (84:84) into the final quarter.

Again inaccuracies of the teams increased and the previously so high speed decreased more and more. But then the Rockets did a 7-0 run and made the Mavs sweat. Doncic just didn’t get into the match and had to find other players to carry the scoring load. However, five minutes no ball found its way into the basket and Dallas had reason to get nervous.

Still three minutes on the clock, the Mavs are eight points behind, but now the furious Doncic show began. The rookie turned two threes in a row and then confidently pulled to the basket for four more points. It was unbelievable, Doncic took Downtown’s step-back throw, ran 11-0 on his own and gave the Mavs the lead.

Luka Doncic. For long stretches it didn’t look like it, but in the end the rookie just has to take this title with him. He was the only one to bring the Mavs back into the game, not afraid to take the difficult throw and thus decided the game. 11 consecutive points in the last three minutes, that’s the Slovenian’s first to imitate.

Rick Carlisle adjusted his boys offensively as well as defensively well to the opponents from Houston. Over long distances the Mavs were able to bring their own playing style through and convinced especially in the transition. The Rockets had problems keeping up with the pace and could often only help themselves with fouls, especially at the beginning of the match. Without the strong performance of James Harden in the third quarter, Dallas would probably have been pulled away at this point.

NFL: Week 14: Must-win games as far as the eye can see
NBA: Blowout! Lakers don’t give Grizzlies a chance – Bonga meets for the first time