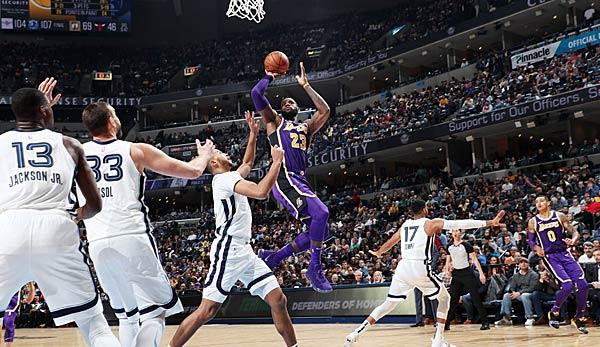 The Los Angeles Lakers have obviously put away their bankruptcy against the Spurs. In a strange hall they left the Memphis Grizzlies no chance from the beginning and finally celebrated an unchallenged blowout victory. The German rookie Isaac Bonga scored his first NBA point.

Already in the first quarter it was difficult for the Grizzlies to find their rhythm offensively. No player was able to convince and in the following section of the game the defensive broke down. At halftime Memphis was already 23 points behind and was not very dangerous for the Lakers for the rest of the match.

In the end, L.A. even left the opposing players open on the triple line as they made catastrophic throws. Only two of their first 13 attempts found their way into the basket, so they tried it further, but a triple quota of 20 percent (6/30 3FG) speaks volumes.

LeBron James already had 13 points and Josh Hart 16 points at the half-time break. Especially on the offensive board the Lakers exploited the weaknesses of the Grizzlies. They won this duel with 19:9 and scored a total of 14 points more after second chances (20:6).

“You forget (the defeats) and just keep going,” James said after the game. “You can’t let that get to you, even if you played three good quarters (against San Antonio). We have to be ready and that’s what we did today.”

So the game was already decided at the beginning of the last section, which the Lakers started with a 25-point lead. A small rebellion of the Grizzlies suffocated the Lakers’ starters immediately, so that James and Co. sat on the bench towards the end of the game and ran the second unit.

For the final minutes, the German rookies Moritz Wagner and Isaac Bonga were allowed to play for a few minutes, but remained inconspicuous. Wagner didn’t hit any of his two litters, but at least he played an assist. It was remarkable, however, that Bonga achieved the first NBA point of his young career by free-throw and also grabbed 2 boards.